A three-day rally snaps as U.S. markets wake up to the reality of the country becoming the current epicenter of coronavirus pandemic. | Source: REUTERS/Lucas Jackson

The Dow Jones Industrial Average (DJIA) rocketed out of bear territory this week after three consecutive days of gains. But the stock market turned lower on Friday as a worrying spike in U.S. coronavirus cases threatened to erase this week’s historic gains.

Coronavirus Worries Keep a Lid on the Dow’s Rally

The U.S. overtook China to report the most confirmed coronavirus cases in the world late Thursday. Donald Trump brushed the label off, claiming it can be attributed to the U.S. improved testing.

I think it’s a tribute to the testing, we’re testing tremendous numbers of people.

Cases in the U.S. are only expected to rise as unrestricted movement between cities make it difficult to contain the virus. 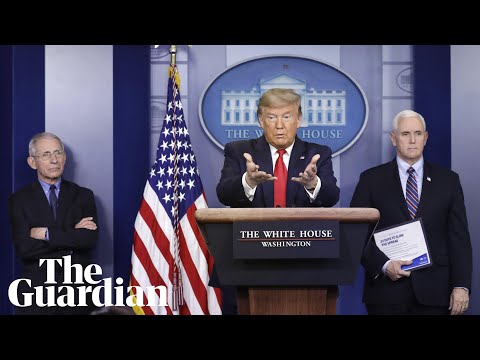 While the government’s $2 trillion stimulus package eased fears of a total economic meltdown, it did little to calm worries about an unmitigated coronavirus outbreak across the U.S.

Investors were spooked by the marked rise in cases Friday morning, which sent the Dow Jones nearly 1,000 points lower and suggested U.S. financial markets would finish the week on a low note.

Profit-Taking to Push the Dow Lower

Here’s how the stock market’s major indices were faring as of 9:59 am ET on Friday:

The majority of Americans believe the stock market hasn’t bottomed yet, an Allianz Quarterly Market Perceptions study shows. That suggests profit-taking is on the horizon as investors try to book gains ahead of the disastrous economic data releases that are certain to come in the weeks ahead.

I wouldn’t necessarily take the price action in the risk markets right now to be a true reflection that this is over. This is going to be an economic fallout. We’re seeing in two weeks what we would normally see maybe in a year and a half or two years.

Dow Takes A Breather With Stimulus Vote Ahead

The Dow Jones has been helped tremendously by the promise of an unprecedented coronavirus stimulus relief package that made its way through the Senate earlier this week. But questions about when the aid will become available and which industries it will help put a damper on excitement over the aide.

The House of Representatives is due to vote today. The relief package is expected to see unanimous support, but the format of the vote could delay its passage. Some worry that House members could be required to vote in person, a technicality that could postpone the vote for hours or even days.

Federal Reserve Chairman Jerome Powell gave investors more to cheer about on Thursday when he confirmed the U.S. central bank had more tools left in its arsenal to keep the economy afloat. His comments helped prop up the Dow’s impressive rally, but investors had all-but dismissed his reassurance by Friday morning.

When it comes to this lending, we’re not going to run out of ammunition, that doesn’t happen. We still have policy room in other dimensions to support the economy.

But even Powell himself noted that the bank will be most helpful once the spread of coronavirus is under control. With the number of U.S. cases rising at an alarming rate, investors seemed skeptical that the bank would have that opportunity anytime soon.