The Dow Jones plodded on higher on Tuesday, stretching further into record territory at the outset of what promises to be another dull day session on Wall Street.

Meanwhile, stock market analysts continue to hold feverish debates about the state of US-China trade negotiations – and what those negotiations mean for the economy moving forward.

The gold price suffered a slight 0.31% drawdown, while the yield on the 10-year US Treasury bond remained virtually unchanged at 1.807%. Would-be safe haven asset bitcoin fell nearly 5% and is currently teetering on the edge of the $8,000 mark.

Trump’s Holding a Gun to the Economy, But Is the Chamber Empty?

Many analysts believe that the Dow and S&P 500 have already priced in a US-China trade deal, but the stock market continues to grind higher even without one.

It’s difficult to get a read on the true nature of Washington-Beijing relations because the narrative seems to fluctuate constantly between raging optimism and sober skepticism. However, tensions may reach an inflection point in less than a month, when President Donald Trump must decide whether to relent on his threat to impose new tariffs on Chinese goods. 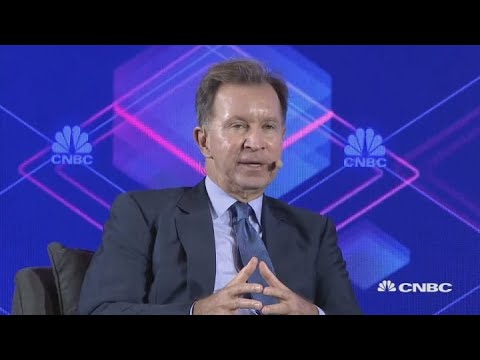 By wielding that near-unilateral power, critics say that Trump is “holding a gun to the head” of the US economy, and by extension, the stock market. That was one expert’s assessment of the administration’s trade policy, delivered at the National Committee on US-China Relations’ China Town Hall on Monday night.

Goldman Sachs doesn’t deny that Trump is holding a gun to the stock market, but the investment bank argues that there’s no bullet in the chamber.

Writing in a note to clients, Goldman Sachs economists led by Jan Hatzius predict that the US and China will sign a partial trade deal that includes an extended tariff truce. Once that happens, the trade war’s economic impact should begin to wane and could disappear entirely during 2020.

The problem is that Hatzius’ forecast implies no new tariff escalations. Right now, it still appears that the Trump administration will proceed with the Dec. 15 tariffs that have long been hanging over trade negotiations.

Speaking with CNBC, Gary Cohn – Trump’s former chief economic advisor – said that Trump believes he will lose credibility with China if he scraps those tariffs without a reasonable justification, such as a firm agreement on a trade deal.

“I think he thinks that that’s a forcing function and if he keeps blinking, he loses credibility in the Chinese eyes,” Cohn said Monday.

Unfortunately, Beijing has made clear that it expects any trade agreement to include tariff rollbacks. That’s why some Chinese officials have reportedly begun to give up hope on reaching a deal before the 2020 US presidential election.

← PreviousDow Futures Rocket but Your Portfolio Faces The Great Dividend Axe
Next →Top Economist Says That the Way to Kill Bitcoin Is to Keep Price Under $1,000