The housing market should have been in tatters given the massive spike in unemployment in recent months, but that hasn’t been the case so far.

In April, the market held its ground, and prices rose at a stronger pace than March as per CoreLogic. And with the latest employment numbers turning out to be way better than expected, there’s a chance that real estate may have avoided a repeat of the massive crash it witnessed during the last recession.

Job growth returned to the U.S. in May. Employers added 2.5 million jobs last month, bringing an end to weeks of gloom that saw 40 million Americans file for unemployment claims over a two-and-a-half-month period.

More importantly, job postings indicate the labor market will continue to improve. According to Indeed, the seven-day moving average of the trend in job postings fell 34.1% annually as of May 29. That’s down from a 39.3% year-over-year decline on May 1.

An improving labor scenario may give the housing market a shot in the arm as more buyers look to take advantage of low mortgage rates.

This could bring a huge reprieve to the housing market and drive sales back into positive territory after April’s big crash.

Existing home sales in April witnessed their biggest drop in nearly a decade, declining 17.2% year-over-year. Building permits plunged 29.7% in April to a seasonally-adjusted annual rate of 891,000 units, the lowest since early 2015.

But with employment now inching up, builders might be more confident re-entering the market given the lack of supply. According to data from Redfin, the U.S. housing market is sitting on just 2.9 months of supply, less than half of the ideal six-month level needed to maintain market balance.

The number of newly-listed homes tumbled 41.4% year-over-year in April to 457,666, which is the reason why prices have been rising. More supply is needed to entice more buyers into the market.

The good news is that homebuilder confidence rose last month. Following April’s big plunge, the National Association of Home Builders/Wells Fargo Housing Market Index gained seven points in May to a reading of 37. The survey saw a ten-point-jump in sales expectations for the next six months, while there was an eight-point increase in the index of prospective buyers.

A reading of more than 50 indicates that builders are confident of sales conditions. Though the reading remains off that mark right now, it cannot be denied that these are noteworthy improvements. 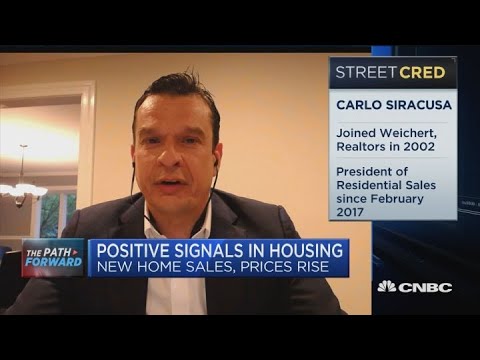 Demand for homes has picked back up after hitting rock bottom in April, and that uptick paired with a lack of supply is a recipe for bidding wars. Homebuyers are getting back out there, searching for more space as they realize using their home as an office and school may become the norm.

And now that the employment scenario is getting back on track, it is likely that demand could keep rising as more consumers enter the market.

A survey by John Burns Real Estate Consulting reveals that new home sales increased 21% year-over-year in May. The survey also shows that buyers who were planning to buy a home in 2021 have decided to move up their timeline.

As such, there’s a good chance that the U.S. housing market may have averted a crisis, though it remains to be seen if the recent momentum translates into future gains.