One by one, our major sporting institutions fell to the coronavirus pandemic. The MLB, NHL, NBA, European soccer leagues – all are on an indefinite hiatus. All except the UFC.

As the sports world came to a standstill over the weekend, the UFC proceeded with their Fight Night card in Brazil.

Well, besides the distinct lack of a crowd, of course.

As other leagues bend to coronavirus, UFC remains defiant

Speaking during an Instagram live interview, Dana White was as defiant as ever:

Here’s the reality: We will be up and running before any other sport will,” White said. “Our sport’s different. We have our own arena next door (the UFC Apex). So we will fulfill every fight for every fighter this year, and we’ll get this thing done.

While other sports leagues wring their hands in fear and issue hesitant, vague press releases, the blunt honesty and fighting spirit from White are refreshing.

On top of that, he’s not wrong.

As long as any sports organization can ensure proper medical supervision for athletes, then there’s no reason not to continue providing entertainment for the beleaguered population.

There will be no crowds in attendance, so there isn’t any risk in that regard. 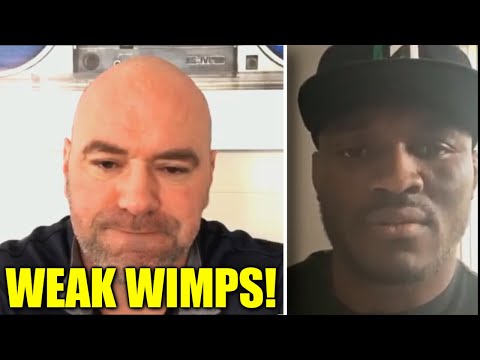 Despite the UFC and Dana White making it clear they are taking all necessary medical precautions, the media hasn’t been shy in berating the UFC president for continuing the show.

Many put it down to ego, which White is known to have. He certainly hasn’t taken the criticism on the chin, firing back at reporters in his usual fashion:

Think about this: Go online and look at some of these people – and this isn’t a knock, this is just a fact: The weakest, wimpiest people on earth cover the biggest, baddest sport on earth. What do you expect them to say? What do you think they’re gonna say?

In Dana White’s mind, reporters who are critical of him for plowing ahead with events during the coronavirus pandemic are wimps.

The irony is, despite White looking the part with his imposing physique and shaved head, he’s actually never stepped into a cage or ring to fight anyone.

Listen, the media can talk as much sh*t as they want. They don’t feed families. They don’t take care of f*cking people. They don’t have people that count on them. They don’t have people to support. We’re doing the right thing as far as medical testing goes and everything. We were taking care of people and making sure that everybody’s healthy, and every fighter that’s with me on the road is getting much better medical attention than they are at home – if they’re with me. You know what I mean?

We know what you mean, Dana. You’ll look after people if they’re with you. We’ve also seen what happens to athletes who don’t follow your lead.