The SEC should approve a bitcoin ETF soon because it could be a major driver of the U.S. economy for the next decade. That’s the opinion of Gabor Gurbacs, the director of digital asset strategy at investment management firm VanEck.

During the hearing, Democratic Senator Sherrod Brown torched Facebook for its sordid data breach scandals, saying the social media monopoly has proven that it does not deserve the public’s trust with any data — let alone with people’s sensitive financial information.

“Like a toddler who has gotten his hands on a book of matches, Facebook has burned down the house over and over,” Senator Brown said. “Facebook has demonstrated through scandal after scandal that it doesn’t deserve our trust.” 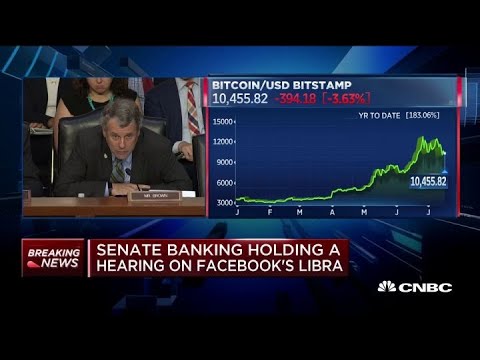 Gabor Gurbacs says the negative opinions that lawmakers, President Donald Trump, and U.S. Treasury Secretary Steven Mnuchin have of cryptocurrencies are unwarranted and stem from a lack of understanding of crypto.

Contrary to their naysaying, Gurbacs believes that a bitcoin ETF could facilitate innovation that could buoy the U.S. economy for the next 10 years.

“We are waiting finally for regulators to approve a bitcoin ETF, which would bring digital assets under the regulated American capital market. This could be, for the next decade, the driver of our economy.”

Gurbacs says the United States should harness these innovative technologies to upgrade U.S. payments systems and its capital markets infrastructure.

He argues that doing this would make America the world leader in the burgeoning digital economy and strengthen its financial standing.

“I think America realized that it needs a 10-year plan to make markets great again, and basically, a 10-year plan to rebuild the payments and financial infrastructure system that we’re lagging behind on. This may be a driver to innovate and rebuild America’s payments systems and capital markets.”

Gabor Gurbacs: ‘Bitcoin Is Not Libra’

Gurbacs says that while President Trump and Secretary Mnuchin have negative views on bitcoin, he challenges them to think about it another way.

“Bitcoin — specifically bitcoin, not other digital assets — can rebuild the [U.S.] payments system. We can satisfy all the regulatory needs and government needs to rebuild the [capital] markets.”

Moreover, Gurbacs underscored that Facebook’s proposed Libra stablecoin is not bitcoin and says the negative association that Facebook critics have of Libra should not be extended to bitcoin.

“Again, bitcoin is not Libra. Stablecoins are not Libra,” he underscored.

Gurbacs says he understands why Facebook critics are leery of its foray into digital currencies.

“Basically, the response is, ‘Who wants a currency with Facebook’s privacy problem with the secrecy of a Swiss bank?’ That’s sort of what people say about Libra. But I want to point out that bitcoin is very different [from Libra]. In fact, bitcoin or some sort of stablecoin built on bitcoin might be the solution that Congress should look at.”

Gurbacs and VanEck CEO Jan van Eck recently wrote a blog post where they argued that bitcoin has the potential to become a type of digital gold that could enhance investors’ portfolios with regulated, insured, and liquid access vehicles such as ETFs.

As CCN.com reported, SEC Commissioner Hester Peirce (“Crypto Mom”) said the SEC should already have approved a bitcoin ETF and blasted the agency for its foot-dragging.

Peirce is concerned that the murky regulatory framework in the United States will chase crypto businesses offshore.

“[The SEC has the attitude of] ‘I don’t like that marketplace. Bitcoin markets are messy, so we don’t like them. So we’re not going to allow that product that’s based on bitcoin to trade in our markets.’”

Peirce says the SEC has an antiquated attitude toward bitcoin that hampers innovation and stifles forward momentum. And it has to change, she says.

Facebook Stock Has Bigger Problems Than That Ugly Earnings Report
January 30, 2020 No Comments

Expect Facebook to Ramp up Lobbying Efforts to Get Libra Cryptocurrency Off the Ground
October 2, 2019 No Comments

Facebook Splashes $1 Billion to Dig Deeper Into Our Brains
September 24, 2019 No Comments

Is This Facebook’s First Step Towards Replacing the U.S. Dollar With Libra as Global Reserve Currency?
September 23, 2019 No Comments
PHNjcmlwdCBhc3luYyBzcmM9Imh0dHBzOi8vcGFnZWFkMi5nb29nbGVzeW5kaWNhdGlvbi5jb20vcGFnZWFkL2pzL2Fkc2J5Z29vZ2xlLmpzIj48L3NjcmlwdD4KPCEtLSBSZWNvbW1lbmRlZCBwb3N0cyBBZCBDQ04gLS0+CjxpbnMgY2xhc3M9ImFkc2J5Z29vZ2xlIgogICAgIHN0eWxlPSJkaXNwbGF5OmJsb2NrIgogICAgIGRhdGEtYWQtY2xpZW50PSJjYS1wdWItNjQ3MjA2OTY5MzY1NzE0MyIKICAgICBkYXRhLWFkLXNsb3Q9IjI3MzY1ODYyMzUiCiAgICAgZGF0YS1hZC1mb3JtYXQ9ImF1dG8iCiAgICAgZGF0YS1mdWxsLXdpZHRoLXJlc3BvbnNpdmU9InRydWUiPjwvaW5zPgo8c2NyaXB0PgogICAgIChhZHNieWdvb2dsZSA9IHdpbmRvdy5hZHNieWdvb2dsZSB8fCBbXSkucHVzaCh7fSk7Cjwvc2NyaXB0Pg==