A weaker than forecast initial jobless claims number, spiking European coronavirus cases, and fall-out from the FOMC all conspired to knock the Dow Jones lower on Thursday.

IG: The Fed Is Backed Into a Corner

To understand why the Dow responded so poorly to the Fed’s policy meeting, one needs to look at the performance of the U.S. dollar, which strengthened noticeably post-FOMC.

Chris Beauchamp, Chief Market Analyst at IG, believes that the Federal Reserve may now be backed into a corner like the European Central Bank (ECB), telling CCN.com:

From the accompanying press conference, it is clear that the Fed finds itself in a similar situation to the ECB; content to err on the side of caution for now with regard to doing any more, but painfully aware that fiscal stimulus needs to pick up the slack even as the chances of that stimulus seem to be receding. With an election looming neither party in Congress wishes to give their opponents anything that could be transmuted into an electoral advantage, and so the deadlock goes on.

With stimulus expectations so low, it’s clear that there could be some upside in the Dow if there were an unexpected bill passed. CNBC’s Jim Cramer certainly believes fiscal stimulus would be great news for stocks.

An additional concern for stocks is a rather alarming spike in coronavirus cases in Europe. Given that cases appeared to be under control across the continent, the threat of additional lockdowns in the world’s second-largest economic area is undoubtedly a concern for global growth. The possibility that the United States endures a similarly dramatic spike in cases is now also on the table.

Risk-off engulfed the Dow 30 on Thursday, as most of the index fell into the red. Watch the video below: 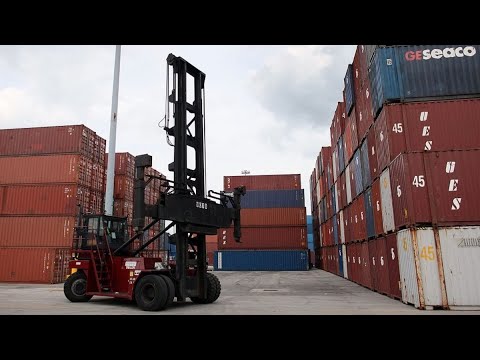 On a rough day for the tech sector, Apple was once again under pressure, with a 1.5% loss. Salesforce.com was the weakest performer in the Dow Jones, giving up 3%, with Goldman Sachs closed behind with a drop of 2.3%.

Elsewhere, both Disney and Nike fell 2%. Bucking the trend, Caterpillar was a surprise winner with a 2.5% gain, potentially due to its close affiliation with China’s economy, which appears to be firing on all cylinders.