Donald Trump has postponed the Daytona 500. Yes, the 45th President kicked off the NASCAR season in Daytona Beach, Florida yesterday. But while he served as grand marshal for the race, he turned the event into a glorified campaign rally. And now, fans blame him for effectively calling the race off, since the race’s delayed start coincided with rain. 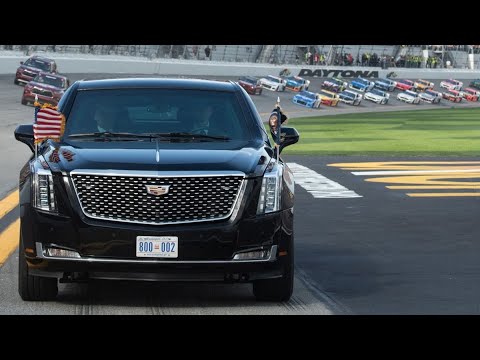 In other words, Trump’s inadvertent postponement of the opening NASCAR race is indicative of his presidency as a whole. He pretends to be a man of the people and receives adoration from the masses. But in the end, he only screws them over.

Donald Trump is hitting the campaign trail yet again, subjecting America to far too many quasi-psychedelic speeches about lightbulbs and washing machines. And since Florida is a key state for him, he naturally sought to appear at the Daytona 500.

The thing is, his appearance imposed a number of inconveniences on the race’s crowd. First of all, security was much tighter, so fans and even drivers had to wait several hours in line to enter the Daytona International Speedway.

Next, Trump took numerous victory laps around the Speedway. We all know that Trump likes to indulge in fantasies every now and again, so this was obviously him taking the opportunity to fantasize about being a NASCAR driver, or maybe simply a good president.

But if this wasn’t already bad enough, Trump then insisted on delivering some kind of ridiculous speech about “God, family and country.” As if Donald Trump gives a damn about any of these. Still, his oratory invited chants of “USA! USA! USA!” So I guess he knows how to play to his crowd.

However, as much as we, the massively indebted peasants of this world can all feel excited and happy for an egotistical billionaire fulfilling yet another life’s ambition, Trump’s drawn-out playtime took its inevitable toll on the actual race. Because he’d caused such a delay, the beginning of the Daytona 500 met with the onset of rain. This rain ultimately caused the race to be called off, after a mere 20 laps.

In fact, Donald Trump didn’t even wait for these 20 laps to end before leaving the stadium. According to Florida-based journalist Jon Alba, he waddled to Air Force One after the pace lap.

The rain had already begun to fall during the warm-up lap. Perhaps Trump had been apprised of the weather forecast, and so thought it wasn’t worth hanging around. One could assume he’s not big on NASCAR. His embarrassing NFL faux pas shows how dialed in he is with major sporting leagues.

Either way, fans ended up turning on Trump. Many blamed him for the delay, pointing out that his presence pushed things back by anything from an hour and a half to upwards of three hours.

Other NASCAR fans (or people who just want to slam Donald Trump) joked that God must be a Democrat. But of course he isn’t, because he doesn’t exist.

Regardless of who is or isn’t a Democrat, one thing is clear from the whole debacle. Donald Trump has an enormous talent for making otherwise important events like the Daytona 500 all about himself. He wasn’t opening the race, and he wasn’t sharing a special moment with other Americans. He was campaigning, pure and simple.