Trump’s Iran Gambit Threatens to Ravage the US Stock Market

Yesterday may have been the stock market’s first step toward a prolonged bear cycle.

The news crushed the Dow, sending the index more than 200 points lower, and put an end to euphoria on Wall Street as the seemingly endless rally screeched to a halt. Now, investors are rushing into safe-haven investments as recent warnings about an upcoming stock market crash are starting to look a little more serious.

Just a few days before the strike, investment guru Dennis Gartman sent out his final edition of the Gartman Letter, a daily publication that institutional investors paid $500 per month to receive.

In that final letter, Gartman described today’s market as a “kids market” in which traders are “young, brash, utterly naive, ill-educated [and], egregiously overconfident.” He noted that this brand of fearless investing comes from being too young to remember the last bear market. He predicted that the “all-too-easily made profits” these “kids” have accumulated will soon evaporate as the bear inevitably takes over the US stock market.

Is this the market crash Gartman predicted? Not yet— but it could be the beginning of one. 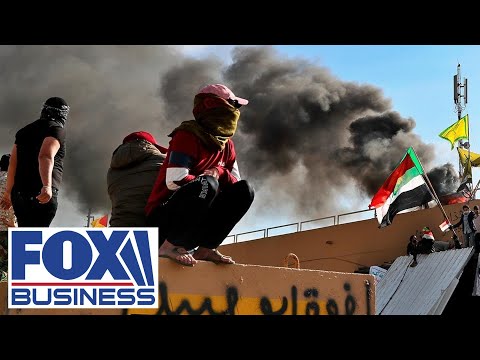 This isn’t the first time geopolitical tension has roiled markets. As Fahad Kamal pointed out,

We’ve seen this story before, the big risk is that the event spirals out of control.

As it stands, the pullback in US stock markets has been relatively muted. Kamal said he doesn’t expect to see things escalate further, but others are more cautious about where the Iran conflict is heading.

Retaliation from Iran a Possible Catalyst to Sink Markets

If that is the case, Friday’s losses would be just the tip of the iceberg.

Tehran will try to take advantage of the situation to try to drive the US out of Iraq entirely, using both political and military measures.

Nicholas Burns, undersecretary of state during the George W. Bush administration, cautioned that Trump’s bold move might have tipped a delicate balance in the Middle East.

Has he planned for how he can keep Iran off balance and avoid a larger Middle East war that the Congress and public may well not support? In other words, has Trump thought through the next 20 moves on the chessboard with Tehran? My guess is he has not.

Even if the Iran conflict doesn’t boil over, markets are primed for profit-taking as securities have been trading near all-time highs. Investors have been looking for any reason to jump ship as worries about inflated valuations create an added layer of uncertainty. That in itself will make it harder for the US stock market to bounce back after Friday’s dip.

Is a Market Crash Inevitable?

There’s no denying that the United States’ conflict with Iran has put a damper on the impressive stock market rally seen over the past few weeks. Much of whether the markets can recover depends heavily on both Tehran and Washington’s next moves.

As oil prices move higher, some are recommending contrarian moves like buying up airline stocks— most of which saw their values decline by around 3% on Friday.

But a contrarian play could be dangerous given markets’ precarious position. Analysts had been forecasting another year of smooth sailing for the US economy as well as financial markets, but the potential for a spike in hostilities with Iran was mostly unaccounted for.

What’s in Store for the US Stock Market

Whether a full-fledged stock market crash will follow Friday’s declines depends heavily on the weekend’s events and whether or not investors are willing to jump back in on Monday.

According to the Stock Trader’s Almanac, the first five days often dictate how the market will perform in a given year. If stocks finish the first five sessions higher, the S&P 500 delivers gains at the end of the year 82% of the time.

This year, the market was remarkably higher during the opening session, but Friday’s dip could be the beginning of a larger decline.

Laura Hoy
Laura has been working as financial journalist covering US markets for more than a decade. Her work can be found in a wide variety of publications including Yahoo Finance, InvestorPlace, Nasdaq and Benzinga. Visit her website, contact her at lmariehoy@gmail.com, see her LinkedIn profile here, or check her out on Muck Rack. Laura Hoy is a Trusted Journalist.