As the Dow and broader stock market careened toward their ugliest drop of the year Monday, analysts blamed the sell-off on negative coronavirus headlines. What Wall Street doesn’t want to admit is that stocks are plunging for a far more chilling reason: Investors have finally started to price in the risk of a long-overdue recession.

All of Wall Street’s major indexes opened sharply lower at the start of the week. The Dow Jones Industrial Average was off by as much as 1,080 points. The benchmark gauge posted its worst drop in two years and closed at its lowest levels since mid-December. In the process, it wiped out its entire gains for the year.

The broad S&P 500 Index of large-cap stocks crashed 3.4%, with all 11 primary sectors reporting losses. Stocks in the energy and information technology sectors were the hardest hit, falling at least 4% on average. Communication services, consumer discretionary and financials sectors each sold off more than 3%.

Plunging tech stocks dragged the Nasdaq Composite Index sharply lower. The tech-heavy index was off by as much as 4.3%.

The CBOE Volatility Index, commonly known as the VIX, spiked to a high of 23.94 on a scale of 1-100 where 20 represents the historic average. The nearly 35% gain puts the VIX on track for its highest settlement since August.

Recession Risks on the Rise

High-frequency algorithms may have picked up on negative headlines tied to China’s shocking admission that it mishandled the coronavirus epidemic, leading to a broad selloff in stocks. In addition to the humanitarian toll, the spread of the novel disease is contributing to a broad slowdown in the global economy that has been years in the making.

Private-sector data released on Friday by IHS Markit showed that the U.S. economy was grinding to a halt in February. The flash services PMI reading of 49.6 was the worst in over six years. The composite PMI gauge, which measures services and manufacturing output, also fell into contraction territory.

Delving deeper into the report, U.S. services companies reported their first drop in new orders since October 2009. The services sector accounts for more than three-quarters of U.S. gross domestic product.

Tech Stocks are Overvalued and Due for Correction: Paul Meeks 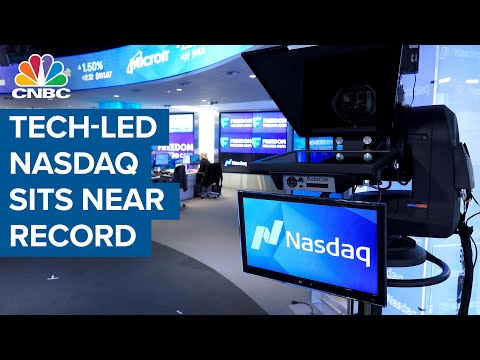 It’s no coincidence that technology shares were at the center of Monday’s selloff. According to portfolio manager Paul Meeks, this wildly overvalued sector could plunge into bear-market territory as the threat of recession grows.

In an interview with CNBC, Meeks singled out Apple for being “grossly overvalued.” It along with other trillion-dollar titans could be the hardest to fall as investors begin pricing in the possibility of recession.

In Meeks’ view, Apple is the most vulnerable to a selloff because its stock has incorrectly priced in a “5G super cycle.”

A tech-sector blowout doesn’t just impact the Nasdaq, but the broader market as a whole. As Meeks pointed out, technology shares aren’t just limited to the information technology sector; at least two other S&P 500 sectors (communication services and consumer discretionary) are heavily exposed to technology companies.

IT and communication services combined account for roughly $10 trillion in market cap. Within consumer discretionary, internet retail is a $2 trillion industry.