In what has become one of the most predictable outcomes in professional sports, the New England Patriots emerged victorious from Super Bowl LIII after besting the Los Angeles Rams 13-3 in Mercedes-Benz Stadium in Atlanta. If history is an accurate guide, that means the Dow Jones Industrial Average is primed for a rally. 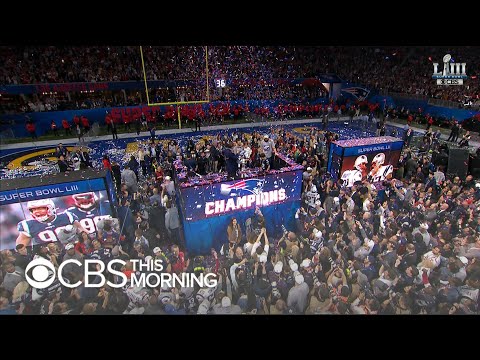 Prior to Sunday’s contest, Tom Brady and the New England Patriots had appeared in eight Super Bowls, winning five and losing three.

In the Monday trading session following each of the Patriots’ three losses, the Dow Jones ended the day in the red.

The Dow’s worst Super Bowl hangover occurred last year after the Philadelphia Eagles — led by backup quarterback Nick Foles — outgunned the Patriots in a 41-33 shootout in Minneapolis. The next day, the Dow plunged by 999.12 points from wire-to-wire, ultimately dropping 1,175 points from its previous close to record its largest single-day drop in history.

Conversely, the Dow has generally been bullish on the Mondays that have followed Patriots Super Bowl victories. Three of the team’s five victories have been followed by Dow rallies, with a fourth — the 2005 victory over the Philadelphia Eagles — followed by a flat day for the index.

Only in 2002, when Tom Brady shocked the Greatest Show on Turf to win his first Super Bowl ring, did the Dow decline the Monday following the contest, losing 218.37 points and failing to crack back through the 10,000 mark (The Dow wouldn’t close above 10,000 again until Dec. 2003).

On Monday, the Dow appears poised to close in the green following the Patriots’ sixth Super Bowl victory. As of 1:53 pm ET, the Dow had climbed more than 87 points since the opening bell.

Can Sports Influence the Stock Market?

Could it be that Wall Street traders disproportionately favor the Patriots and that this sentiment seeps into their behavior on the Monday following the big game?

That’s not as crazy as an idea as it might sound. In 2007, a local Taiwanese business journal published a study demonstrating a correlation between the individual pitching performances of Taiwanese MLB star Chien-Ming Wang (then of the New York Yankees) and price fluctuations on the Taiwan Stock Exchange.

However, two of the Patriots’ losses came at the hands of the New York Giants, who likely have a strong following on Wall Street as well. Granted, those two declines were much smaller than the nearly 1,000 point crash that followed the Patriots’ loss to the Eagles, so maybe there’s something to this theory after all.

As long as we’re looking to the Super Bowl to divine the direction of the US stock market, the Patriots win could bode well for the S&P 500’s year-end performance, too. Matt Maley, an equity strategist at Miller Tabak, told CNBC that the broad consumer index has finished the year in the green following Patriots championships but has declined an average of 10 percent in the three years they lost.