Saudi Arabia Has Squandered Its Wealth. And It Wants You to Hold the Bag

Saudi Arabia plans to sell up to $10 billion worth of oil assets. But after the disastrous Aramco IPO, will anyone take the bait?
PHNjcmlwdCBhc3luYyBzcmM9Imh0dHBzOi8vcGFnZWFkMi5nb29nbGVzeW5kaWNhdGlvbi5jb20vcGFnZWFkL2pzL2Fkc2J5Z29vZ2xlLmpzIj48L3NjcmlwdD4KPCEtLSBUb3AgQXJ0aWNsZSBDQ04gLS0+CjxpbnMgY2xhc3M9ImFkc2J5Z29vZ2xlIgogICAgIHN0eWxlPSJkaXNwbGF5OmJsb2NrIgogICAgIGRhdGEtYWQtY2xpZW50PSJjYS1wdWItNjQ3MjA2OTY5MzY1NzE0MyIKICAgICBkYXRhLWFkLXNsb3Q9IjU4NDY0ODIyMjMiCiAgICAgZGF0YS1hZC1mb3JtYXQ9ImF1dG8iCiAgICAgZGF0YS1mdWxsLXdpZHRoLXJlc3BvbnNpdmU9InRydWUiPjwvaW5zPgo8c2NyaXB0PgogICAgIChhZHNieWdvb2dsZSA9IHdpbmRvdy5hZHNieWdvb2dsZSB8fCBbXSkucHVzaCh7fSk7Cjwvc2NyaXB0Pg==

Saudi Arabia’s oil price war is a classic example of cutting off your nose to spite your face. In an attempt to hurt Russia and the American shale patch, Saudi Arabia may push itself to the brink of economic ruin. Desperate for cash, the Kingdom is looking to sell a $10 billion stake in its state-owned oil pipeline business.

But after Mohammed Bin Salman burned investors with the disastrous Aramco IPO, will anyone be stupid enough to buy into Saudi Arabia’s latest scheme?

A Fool and His Money Are Easily Parted 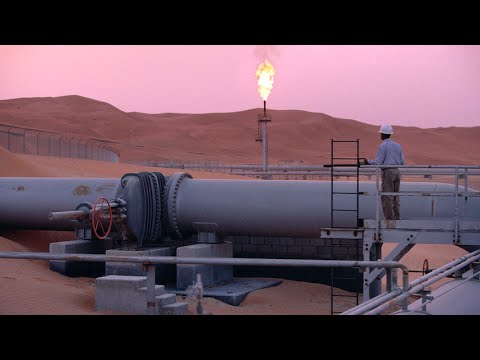 Saudi Arabia is a perfect example of what happens when broke people get fast money. Originally an impoverished wasteland that subsisted on limited agriculture and pilgrimage revenue from its holy sites, the Kingdom of Saudi Arabia transformed into a high-income country by exploiting its vast oil reserves through its state-owned oil firm Saudi Aramco.

Despite talking a big game, Saudi Arabia has failed to diversify its economy away from oil, which still accounts for 90% of exports and 87% of government revenue. It also doesn’t encourage a motivated, entrepreneurial population with its socialist policies and massive dole.

Saudi Arabia is essentially a welfare state. Mohammed Bin Salman reportedly gave out $32 billion to the Saudi citizens in the form of bonuses, subsidies, and direct cash payments to celebrate his coronation. And the country’s break-even oil price sits at $91 per barrel due to his inflated government budget and massive white elephant projects like Jeddah Tower and Neom, a multi-billion dollar planned city in the desert.

Saudi Arabia is divesting many of its state-owned assets to generate cash to help bolster its sovereign wealth fund. Most recently, the kingdom plans to sell a multi-billion dollar stake in its oil pipeline business. And it is working with investment banks JPMorgan and Mitsubishi Financial Group to find ‘bagholders’ for the assets.

According to Yasir Al-Rumayyan, the chairman of the Saudi Public Wealth Fund, these pipeline assets could fetch as much as $10 billion.

However, there are several problems with the proposed asset sale and their multi-billion dollar valuation.

First is the timing. Saudi Arabia is planning to sell oil-related assets at a time when the entire oil supply chain is buckling under the pressure from the coronavirus pandemic and an unprecedented decline in oil prices. By selling the assets at this time, Saudi Arabia ensures that it will get the worse possible price–that’s if anyone is stupid enough to buy.

In December 2019, Saudi Arabia sold a 1.5% stake in Saudi Aramco for $25.6 billion. Soon after the IPO, the Saudi government started an oil price war that tanked oil prices by almost 70% and sent Aramco shares into freefall. Investors, many of whom took out loans to buy shares, were left holding the bag.

This is what Um Fahad, a mother of four, had to say about her decision to invest with the incompetent Saudi government:

The whole family invested in Aramco on the hopes it is a guaranteed investment and we never thought it will go down.

Mutlaq, a father of five who took out a loan to invest in Aramco, also isn’t happy with his bet:

I have regret now — regret for wasting my money on Aramco.

How Saudi Arabia Blows its Money

Saudi Arabia’s asset sales wouldn’t be such a bad thing if Mohamed Bin Salman knew what he was doing with the money. But the 34-year-old prince has proven himself a questionable investor who squanders the cash on money-losing stocks and risky white elephant projects.

In 2017, Saudi Arabia invested in the failed co-working startup WeWork through the SoftBank-managed Vision Fund. It also lost $1.1 billion on Uber and sold Tesla shares right before the stock soared to $900–losing up to $4.5 billion in unrealized gains.

The fund is also buying an English soccer team for $380 million and building a $500 billion city in the desert called Neom. If prince Salman’s investment track record is anything to go by, these investments will also end in failure.

William Ebbs
As a writer with over five years of financial experience, William Ebbs has earned millions of page views with his hard-hitting, opinionated work. When Will isn't writing, he enjoys strategy gaming, world travel, and researching for his next article. William Ebbs is based in the United States of America. Muck Rack | Email me | Follow Me on Twitter |Link up with me on LinkedIn
Subscribe
0 Comments
Inline Feedbacks
View all comments
← PreviousDid Facebook Just Leave Zoom Stock Bulls Holding an Empty Bag?
Next →Is Bill Gates Really the Great Guy You Think He Is?

3 Reasons Why This Week’s Oil Price Rally Is a Dead Cat Bounce
September 19, 2020 No Comments

Saudi Arabia’s VAT Hike Proves the Oil Price Rally Is About to Crash
May 11, 2020 No Comments