Watch Out Robinhood Traders, Nikola Is the Sucker in the GM Deal

The deal between General Motors and Nikola Corporation gives the former a stake in the latter. GM gets paid to make cars for Nikola, too.

Since listing publicly through a reverse merger in June, Nikola has been a favorite stock among millennials on the Robinhood trading app.

A strategic agreement between Nikola and General Motors may give millennials more reasons to invest in the new energy carmaker. Those who acquired the Nikola stock just days ago already have a reason to smile. After the deal with General Motors was announced, Nikola’s stock surged by 40%.

But this agreement is no slamdunk for Nikola investors. General Motors is the big winner. Under the deal, the Detroit auto giant will manufacture electric and fuel cell-powered trucks for Nikola based on GM’s technology at little to no risk.

For Nikola, the agreement provides little value. Here’s why.

The deal will give General Motors an 11% stake in Nikola worth $2 billion as a prepayment. GM gets a board seat, too, enabling it to influence the Nikola’s direction.

The legacy carmaker could choose to cash out one year from now. Another third will be eligible for sale the subsequent year and another third the year after that. So far, GM is already enjoying paper profits.

The Detroit Free Press estimates that the deal will deliver for GM approximately $4 billion in benefits. The unquantifiable benefits for the Detroit automaker could be even higher.

GM CEO Mary Barra said the partnership with Nikola Motors is a validation of the Detroit automaker’s technology. Watch the video below: 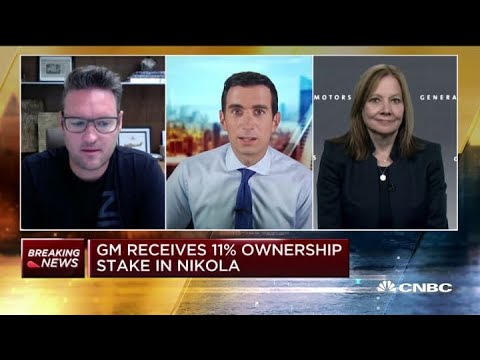 2. GM tests out its tech at zero cost

The electric and fuel cell-powered trucks that GM will manufacture will be housed in upper bodies designed by Nikola. This means that Nikola’s contribution is just the look and feel of the trucks.

General Motors gets to test its technology on Nikola’s products in the real world at no cost. The market reception and feedback will be invaluable and can then be used to make improvements as GM prepares to launch its upcoming battery and fuel cell-powered brands.

Furthermore, General Motors will do this at a guaranteed profit. GM will get up to $700 million of capital expenses needed to manufacture 50,000 units annually.

Nikola will only be given an intellectual property license to market and sell the vehicles in North America. If they prove successful under the Nikola name, it would be a lost opportunity for GM not to market the same light-duty trucks under a different name in other parts of the world.

With renewable energy carmakers currently one of the hottest sectors right now, GM is benefiting from its association with Nikola.

Since Nikola will market the light-duty trucks that General Motors will manufacture, the latter will enjoy free publicity for its technology (besides the exterior design, everything else is GM’s). With GM positioning itself as a supplier of battery and hydrogen fuel cells to other manufacturers, this is as good a deal for the Detroit automaker.

For GM, getting such a large order helps scale the production of its electric and fuel cell parts and components. This will help in reducing costs, thereby increasing GM’s competitiveness in the long run.

In short, GM is getting a massive order for its new energy truck technology, all at a guaranteed profit. And it’s getting stock incentives, too. For such a lopsided deal, it doesn’t take a genius to see who got the raw end of the bargain. Hint: it’s not GM.

Is the GM-Nikola Partnership a Game-Changer for Tesla?