While the number of coronavirus cases in the U.S. continues to spike, the Dow Jones Industrial Average (DJIA) has rallied more than 20% off its lows. But options traders are sending investors a warning signal: Don’t trust the stock market rally – it’s not going to last.

Instead of taking long positions to chase the stock market’s uptick, options traders are using this bounce to reset hedges. Xu pointed to equity skew, which compares the cost of bearish options against bullish ones, as evidence that investors are skeptical.

Investor sentiment remains extremely cautious as can be seen in equity-skew measures re-steepening significantly. [There’s] no faith in this rally. In the options market, investors have taken advantage of the bounce by resetting hedges, rather than adding to longs.

This is especially apparent in the tech sector, which has outperformed the wider market.

The caution isn’t unfounded— many expect this rally to be short-lived as the economic pain associated with the coronavirus ramps up.

History shows market crashes like this one often see a few bounces before settling on a bottom. When the dot-com bubble burst, the Dow lost 30% of its value. The 2008 financial crisis erased 50% of the Dow’s previous peak.

On its worst day this year, the Dow slid to 18,591. The most bearish predictions suggest it could lose up to 70% of its pre-crash value— putting the bottom closer to 9,000.

By most accounts, the U.S. is heading into a recession. But the magnitude of the economic pain is still a massive unknown. That’s keeping analysts from making an accurate prediction about where the stock market is heading, according to Bruce Kasman of JP Morgan Chase.

The key outlook issue now is gauging the depth and the duration of the 2020 recession. If a normalization in activity from depressed levels takes hold midyear alongside building policy stimulus, the depth of the current downturn can be seen as a springboard for a strong snapback in growth.

Indeed, the v-shaped recovery that everyone has been hoping for would suggest the Dow may have already found its bottom and is on the way up. But that is starting to look unlikely as coronavirus continues to spread unabated across the United States.

This is different. The thing that is scarier about it is you’ve never been in a scenario where you shut down the entire economy. You get a sense in your stomach that we don’t know how to price this and that markets could fall more.

This Could Be the Beginning of the End for the Dow 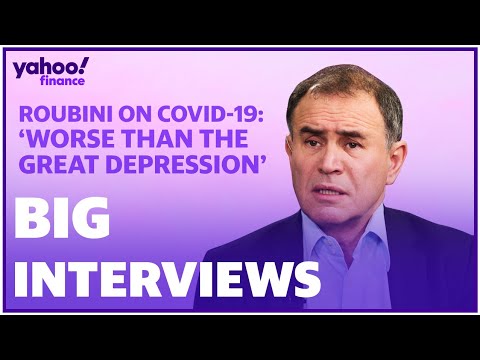 Chiavarone isn’t alone in fearing the unknowns that economic shutdowns around the world present.

Economist Nouriel Roubini, who predicted the 2008 financial crisis, says the speed with which we’ve seen entire layers of the economy collapse is frightening.

He sees the coronavirus crisis costing Donald Trump the election in November, further exacerbating the economic downturn and beating the stock market ever lower.