With crude oil prices going negative for the first time ever, everyone and his sister is scrambling to figure out how to buy oil. There must be a way to get someone to pay me to take oil off their hands so I can resell it when the world is normal again and make a killing, right?

Oil prices went negative because storage tanks filled, so oil had nowhere to flow. Even people in ETFs, who never once thought about oil being a physical reality that must be dealt with because they were only trading paper (they thought), learned they had better think about reality.

This week’s story of crude carnage offers oil investment lessons from both a small-time trader and the massive state-owned Bank of China. The little guy almost got washed out, but with a shot of luck made a narrow killing in the end — a bit too narrow. At that same moment, the Bank of China took a stunning hit between the eyes.

In fact, he almost wound up with every basement in his hometown full of oil:

I bought a few contracts of WTI CL 05-20 Futures yesterday at the low tick of -$32. Started taking profits off as it rose, but let one single contract run to $-4.

It seemed easy to invest in oil when people are paying you to take it! That was until he realized that, when the contract closed at the end of the day, he’d have to take possession of the oil! Things could have gotten messy at that point because, while oil is measured in barrels, it doesn’t usually come wrapped in them.

Investing in oil futures contracts for West Texas Intermediate isn’t like buying bonds. You’re actually buying a commodity that you have to take physical delivery of in Cushing, Oklahoma.

What’s that? You have a train pulling up to dump oil at the end of May? Not sure my swimming pool and basement will hold that much.

Then there are those EPA spillage fees involved with improper storage. There are a lot of ways this deal could have gone more sour than the worst of crude.

update: Thankfully the CME/NYMEX has procedures for situations like this. Final contract settlement is done by cash settlement (minus a small settlement fee) for those not wanting to take physical delivery. NYMEX rulebook section 698103….

Edit 2: yeah that rule book I referenced ? That’s for a different product. Rip.

Fortunately, this guy claims to have blundered his way into actually making nearly $30,000. It was simple: he prayed for angels of mercy, and they delivered, and when he returned from his heart replacement surgery, he kindly put himself up as an example of what not to do:

tldr; I traded CL 05/20 futures in the negative price range the day before expiry, almost got cucked, got excited looking up the wrong settlement information on a different product, panicked, and ended up getting out of the trade before having to worry about taking physical delivery and made $29,790.

Here’s a clear explanation of how this whole crazy contango went down and what to be careful of if you buy oil – so you don’t lose money like those who went long for too long: 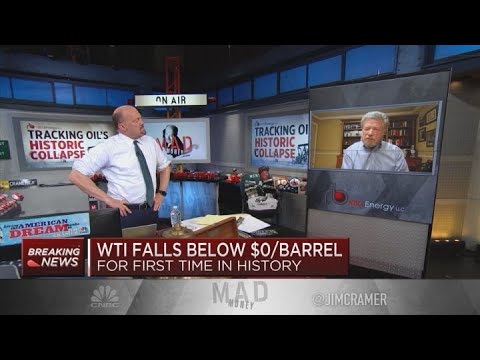 China’s state-owned bank was trying to roll over their oil futures contracts for May delivery in WTI, as they are accustomed to doing at this time of month. They play to make the big money by waiting until the last minute. Only this time, they found no one on the other side of the trade, and their angels weren’t so merciful.

Smelling blood, those who did have storage outside of Oklahoma waited until the BOC coughed up enough to make it worth rerouting the oil to the West Coast.

Banks and investors got slammed when banks offering these products found themselves in the unheard-of position of having no one who would pay for oil because of the coronavirus crush at Cushing.

They had a lot of the current contracts to sell in order to roll into next month’s futures… or fill the banks’ vaults up with barrels of oil.

Bank of China… was rolling over West Texas Intermediate U.S. futures for May delivery on Monday, only a day before they were set to expire, unlike other Chinese banks who rolled over their oil futures at earlier dates, reported Caixin, citing traders familiar with the matter.

Bank of China sold the May contract into a maelstrom of selling, with the now-defunct contract eventually settling at negative-$37.63 a barrel on Monday…. Angry retail investors reported they had lost all their principal, while some even said they now owed money to Bank of China.

For some perspective on how unusual this was, here’s the price of oil throughout modern history:

A barrel of WTI crude was effectively cheaper than it was before cars were invented. In fact, an empty barrel of WTI briefly became worth a lot more than a full one.

Before you decide to invest in oil to make more bank than the bank, consider the plight of the United States Oil Fund (USO), down 80% YTD.

Every day is now a scramble for survival for the largest oil ETF, the USO, which is desperate to avoid the liquidation that its smaller peer, the OIL ETN… succumbed to yesterday…. To survive, it will succumb to the lowest tricks in the book… puffing up its stock price using such cheap gimmicks as reverse stock splits…. As a result of the reverse share split, USO shareholders… will receive one post-split share of USO for every eight pre-split shares of USO they hold.

Maybe the sudden rise in share values will trick the dumbest retail investors into thinking they just made money with their oil investment, even though they have one-eighth the number of shares they once held.

That’s how you “make money” in oil. You didn’t know fool’s gold came in black, did you?