Software giant Microsoft has announced it's looking to build a new digital identity program for users via the Bitcoin blockchain. | Source: Shutterstock

By CCN.com: Does Microsoft consider blockchain to be the strongest technology in the world? Who knows, but they sure seem to recognize its growing mainstream status and view it as a potential moneymaker.

The company recently announced that it would be building a decentralized identity (DID) network on top of the Bitcoin blockchain, the oldest and arguably most trusted blockchain within the space. The network will be built in accordance with standards set by the Decentralized Identity Foundation, which Microsoft claims can overpower the “throughput issues” commonly witnessed on the Bitcoin blockchain.

How Can Bitcoin and Blockchain Be Improved?

Microsoft is also confident the use of the blockchain could lead to “tens of thousands” of operations per second. In a blog post, the tech giant explained:

“We believe every person needs a decentralized, digital identity they own and control, backed by self-owned identifiers that enable secure, privacy-preserving interactions. This self-owned identity must seamlessly integrate into their lives and put them at the center of everything they do in the digital world.”

A blockchain identity would allow people to log into online accounts without having to reaffirm themselves each time. As it stands, multiple online accounts mean multiple logins. A blockchain-based digital identity would allow users to simply log in once and then use that ID to access their online data, reducing “pain points,” as Microsoft calls them.

For Microsoft, the move likely means two things, the first being that they are looking to accomplish what several other companies either haven’t or couldn’t in the past. The second thing is that Microsoft clearly views blockchain as a technology that’s not part of the future but rather already here.

Since 2017, Microsoft’s dealings in blockchain have increased tenfold, with executives recently announcing that they had joined hands with coffee king Starbucks to provide the company with support for its blockchain, Internet of Things (IoT), and artificial intelligence (AI) divisions. The company had also previously entered a partnership with Mastercard in 2018 to assist in the development of another digital identity platform, much like what it’s doing on the Bitcoin blockchain. 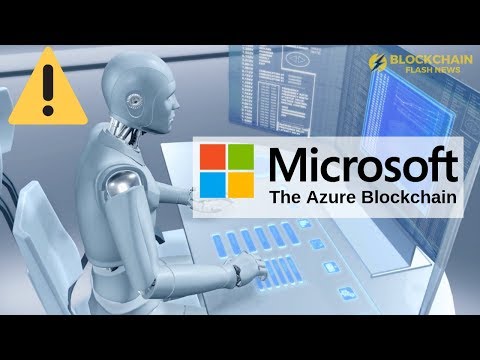 The project was designed to give users greater ease when accessing their online data and accounts. These users, who have many passwords and credentials to remember, would no longer be required to commit all their login information to memory and could simply utilize a digital ID to bypass all these login pages.

Bitcoin and Blockchain Stand to Gain Much More

In many ways, this is just a deeper step into blockchain territory for Microsoft. Another solid addition to its already growing blockchain department. For bitcoin, however, the news is another push toward mainstream status and legitimacy. The move coincides with the currency’s recent price spikes, and at press time, one unit of bitcoin is trading for roughly $8,000 – the highest it’s been in nearly a year.

Its “contract” with Microsoft could signal greater usage and implementation into traditional financial companies, which could not only lead to further price hikes but stabilization for the currency and relief from the volatility that has plagued it since birth.