When Jadeveon Clowney came out of college, the hype was incredible. His combination of size, strength, speed, and talent made him a no-brainer to go No. 1 in the 2014 draft – and the Houston Texans were thrilled to have him.

Six years later, no one seems to want him anymore.

Jadeveon Clowney Is (Still) Demanding Too Much Money

He was a stud during his time with the Texans, and he was productive during his lone season in Seattle.

After missing 17 games in his first three seasons, he has only missed four games in the last three years. He’s never been called “toxic” or a “locker room cancer.”

And yet he’s still unsigned less than three weeks before the NFL season starts. What gives?

With his rookie contract and its constraints in the rearview mirror, Jadeveon Clowney entered free agency with the same goal as everyone else. He wanted to cash in.

He set his expectations rather high, demanding a reported $20 million per season. And he wasn’t willing to budge.

Rumor has it that he fielded – and rejected – several offers in the $15 million range.

Clowney’s Ego Is Going to Cost Him

At $20 million, his salary would rank fifth among defensive ends. He’d make $800,000 less than Frank Clark and $2 million more than Trey Flowers.

A $15 million payday would rank 15th, putting him on par with Dante Fowler Jr. And while Clowney thinks that price is too low, it might be too generous.

It’s true that he’s a rarity among defensive ends in that he defends both the pass and the run well, but he doesn’t grade out as a genuine superstar.

This doesn’t mean Clowney is wrong to try to secure as large a contract as possible. If he doesn’t advocate for himself, no one will. Eventually, though, you have to be realistic. You aren’t likely to be paid like a superstar when you’ve yet to play like one.

Had he made a few more plays that like that legendary hit in the 2013 Outback Bowl, he might have a case. Watch it below: 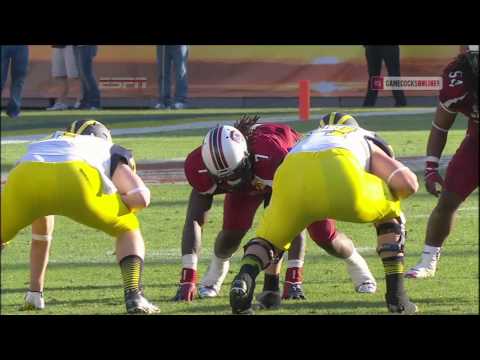 His NFL game tape – while solid – just has not lived up to the college hype.

Rumor has it that he may be willing to sit out if no one caves to his outrageous contract demands. While that strategy helped Le’Veon Bell escape the clutches of the Pittsburgh Steelers, it didn’t get him the full payday he wanted.

It won’t net Clowney the contract he wants, either. Oh, someone will end up paying him, but I suspect it won’t be nearly as much as the offers he’s turned down – much less the one he wants.