Now ex-Phillies manager Gabe Kapler was handed the keys to a Mercedes this season and managed to turn it into a clunker.

Kapler is out after two years in the Phillies dugout, the club announced on Thursday, after an 81-81 finish to a season that started out with so much promise.

The Phillies have dismissed Gabe Kapler

No, owner John Middleton never actually said they were going to spend “stupid money.” What he did say back in the offseason, with prized free agents like Bryce Harper and Manny Machado on the market, was this:

“We’re going into this expecting to spend money. And maybe even be a little bit stupid about it. We just prefer not to be completely stupid,” Middleton said, according to USA Today’s Bob Nightengale.

General Manager Matt Klentak obliged his boss, going out and bringing in a haul of free agents. The most noteworthy addition was Harper, who signed a then-record 13-year, $330 million contract in March. The Phillies also signed former NL MVP Andrew McCutchen to a three-year, $50 million deal, and traded for shortstop Jean Segura from Seattle and catcher J.T. Realmuto from Miami.

The gamble didn’t work. Philadelphia started off the year strong, leading the NL East as late as June 11 and holding the second-best record (38-29) in the NL at the time. From then on, they finished nine games under .500 and with the fifth-worst record in the NL. The Phillies spent $401 million on free agents in the offseason and had a one-game improvement over 2018 to show for it, ending up 16 games behind the division champion Atlanta Braves.

It was the second straight year the Phillies let slip the division lead with a mediocre run. In 2018, they led the division on Aug. 12, trailing only the Chicago Cubs in the NL, but ended the year 15-30 in their last 45 games to finish 80-82.

Kapler, who was hired in 2018 with just one year of minor league coaching experience, is bearing the brunt of those two poor finishes. But not everything is his fault.

Bryce Harper didn’t play like the superstar the Phillies expected him to be, finishing his first year in a Phillies uniform with his worst OPS (.882) in three seasons and striking out a career-high 178 times. Aaron Nola, a Cy Young candidate in 2018, regressed this season and saw his ERA increase by 1.5 runs per game.

Other things were just out of Kapler’s control.

Jake Arrieta didn’t pitch past Aug. 11 after undergoing elbow surgery. All-Star relief pitcher David Robertson, signed to a $23 million deal in January, appeared in just seven games, none after April 14. But the biggest loss was suffered on June 3, when McCutchen suffered a torn ACL after an awkward swing during a game in San Diego. The Phillies spent the last four months of the season without the lineup Middleton opened his wallet to buy.

Kapler, though, isn’t blameless for the Phillies disappointing season. He also made some questionable decisions, notably moving Rhys Hoskins out of the cleanup spot for much of August. Hoskins hit .243 with 27 homers from the fourth spot in the lineup; after Kapler moved him up to the top three spots, he hit .162 with two home runs in 32 games.

Where the Phillies – and Kapler – go next 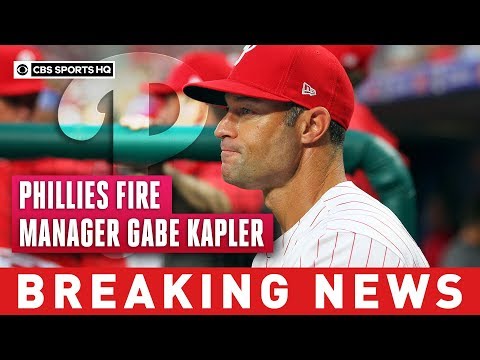 His firing makes eight vacant managerial positions across baseball. That includes the San Francisco Giants, who are looking for a new manager after Bruce Bochy retired. The Giants’ president of baseball operations, Farhan Zaidi, was previously the general manager of the Los Angeles Dodgers, who hired Kapler as director of player development in 2014. Kapler interviewed for the Dodgers’ manager position in 2016 before it went to Dave Roberts.

That's more than a quarter of the league.

The Phillies, meanwhile, are looking for their fourth manager since 2014. Potential candidates include John Farrell, who interviewed for the job that eventually went to Kapler, and Buck Showalter, who was hired in Baltimore by current Phillies president Andy MacPhail.