The Brooklyn Nets are 9-4 since Kyrie Irving went down with injury. Here are five reasons why they’ve been so much better without him.

The Brooklyn Nets knew exactly what they were sacrificing by signing Kevin Durant and Kyrie Irving last summer.

Could they successfully blend an existing team-first ethos with that franchise-changing star power? That was certainly the hope, and it’s too early to say it won’t prove the case when Durant makes his long-awaited Brooklyn debut in 2020-21.

But what’s also abundantly clear is that the Nets have been far better this season since Irving was sidelined by a shoulder injury in mid-November. Here’s why.

Brooklyn was 4-7 when Irving went down on Nov. 14, and has gone 9-4 since. A relatively weak schedule over the last month has played a part in the Nets’ turnaround, but recent precedent suggests we should have seen their success without Irving coming anyway.

The 2017-18 Boston Celtics famously pushed LeBron James and the Cleveland Cavaliers to seven games in the Eastern Conference Finals while an injured Irving watched from the bench. But they also went 14-8 without him during the regular season, a trend that continued a year ago when Boston was an eye-popping 12-3 under the same circumstances. 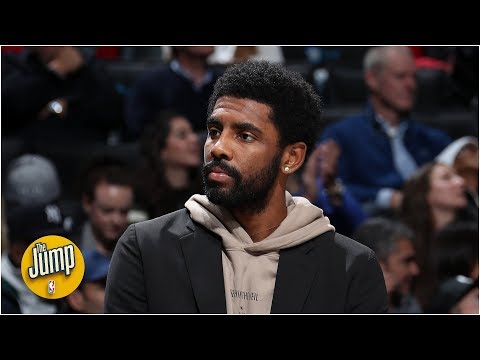 The Nets allow nearly five points per 100 possessions more with Irving on the floor compared to the bench, a team-high. Their defensive rating since his injury is a 108.0, an average number that’s nevertheless far superior to their mark before he went down.

There’s not a single aspect that explains Brooklyn’s improvement on that end, but it’s telling that its new starting lineup has a defensive rating of 107.2. Irving has been a negative defender throughout his career. It’s no surprise the Nets would be stingier defensively when he’s not just catching a breather on the bench, but sitting there in street clothes.

Irving’s debilitating impact on his team’s defense has been readily apparent for years. But the assumption has always been that any drop-off prompted by his presence on that side of the ball would be offset by improvement on the other.

Indeed, Brooklyn was much better offensively with him on the floor before he was injured – over 10 points per 100 possessions better, a team-best. Still, the Nets’ overall offensive rating of 109.3 amid Irving’s absence is a hair higher than their team-wide mark prior to his injury, and multiple players own an individual offensive rating since then that’s comfortably higher than his.

Dinwiddie is no longer a secret. He broke out in 2017-18, finishing third in Most Improved Player of the Year voting, and made significant strides last season despite being relegated to the bench behind D’Angelo Russell.

Back in the starting lineup with Irving sidelined, Dinwiddie has played at an All-Star level. He’s averaged 23.8 points and 7.5 assists in Brooklyn’s last 13 games, managing above-average efficiency despite struggling from beyond the arc.

Dinwiddie has been Brooklyn’s offensive bellwether to an extent even Irving wasn’t in the season’s early going. Its offensive rating with him on the floor since mid-November is 114.2, over 20 points per 100 possessions more than when he’s on the bench – a superstar-level gap.

1. A Return to Ball and Player Movement

Coach Kenny Atkinson was quick to critique his team’s altered offensive attack this season, in late October quipping that the Nets are “not really running anything.” Irving’s role in chipping away at Brooklyn’s offensive execution seemed clear, but Atkinson pointedly stressed there was no one player to blame.

The Nets’ rate of assisted baskets has jumped from 54.5 to 63.7 over the last 13 games. They’re passing more, dribbling less, and moving the ball with newfound haste and precision.

Basically, Brooklyn got back to the offensive approach that propelled it to such surprising success before Irving arrived. The challenge now? Maintaining it once he returns.

September 20, 2020 No Comments
← PreviousThere’s More Than History at Stake for Lamar Jackson and the Ravens Against the Jets
Next →The Kings Aren’t Just Surging but Bound to Get Better as the Season Continues