Cleveland Browns quarterback Baker Mayfield is a pretty upfront kind of guy. He isn’t going to be vulgar or grossly unprofessional, but he is going to be honest and tell you what he thinks. If you don’t like it or think he is too harsh, he isn’t going to apologize for it.

But if you waste his time asking a dumb question…he’s going to tell you.

In Baker’s Defense, It Really Was a Dumb Question

The question came during Mayfield’s media availability on Wednesday from longtime Cleveland sports reporter Tony Grossi. Leading up to the “dumb” question, Grossi was asking about an offensive drive at the end of the first half.

Mayfield already appeared agitated with Grossi before the now-infamous question (and it was really dumb):

I love that Baker feels the same way about Tony Grossi as the rest of Cleveland pic.twitter.com/BbVwFt4dHS

Storming out like that is never a good look, but sometimes leaving a situation is better than doing something—well, dumb. Mayfield took to Twitter shortly after to explain himself:

say that I’ve gotten complacent. My sense of urgency is at an all time high. And if I offend anybody along the way… that’s too bad

Grossi also tried to explain his side:

.@TonyGrossi: I don't want to be in a confrontation with Baker but he's been very disrespectful the past few weeks. I was challenging him about the 2 minute drive and he didn't like that. #Browns

It is worth mentioning that there is a lot of history between Mayfield and Grossi, and none of it is good. Grossi was highly critical of Mayfield before the draft and often tried to paint him in a negative light leading up to and after the draft.

He has been known to compare Mayfield to Johnny Manziel and once suggested that Mayfield existed to antagonize the Browns:

Baker Mayfield was put on this planet to sucker the Browns. #100yearswar.

Is it right for Mayfield to walk off as he did? No, but Mayfield has always been a passionate player on and off the field. So, his reaction to Grossi’s line of questioning is par for the course. He was just being himself– and it was a stupid question. What quarterback is going to be happy that a drive didn’t score points?

But, from his comments, it sounds like Grossi was trying to get a rise out of Mayfield. So, not too professional on his part, either.

Something like this, as could be expected, generated thousands of responses on Twitter. Most were in support of Mayfield, unlike after pictures of him watching the goat hair cleats-exchange went viral. Many fans called for ESPN to fire Grossi:

Nick let’s not forget @TonyGrossi and idiot Bill Livingston ran Bill Belichick out of town and then said he would never be a HC in NFL again. Grossi is the anti Fred McLeod. Overly critical. Antagonistic. Loser

Honestly at this point I'm surprised The Haslams haven't banned Grossi like Moddell did. The guy is a clown.

Baker is the leader most of us fans want. Majority of us have stopped paying Grossi any attention. I can’t believe He still has a job. Anyway, the media should stop acting like snowflakes when a player gets annoyed with them and doesn’t want to put up with it anymore #buzzoff

One fan even started a petition at Change.org (because those things do a lot of good), and there is already a t-shirt commemorating the event available.

Time to Worry About Baker Mayfield?

It never looks good when a young quarterback loses his cool. People start to wonder if a player has the temperament to be a franchise quarterback when he loses his composure over a reporter’s question. It doesn’t matter how stupid the question was.

If you can’t handle a dumb question, what are you going to do when Aaron Donald is bearing down on you? Are you going to have a Ryan Leaf-moment after the game while talking to a reporter? 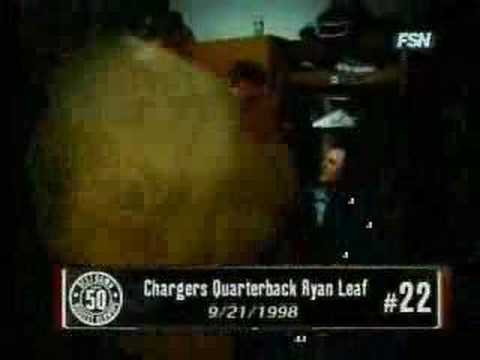 Mayfield didn’t blow his top like Leaf. He seemed to be in complete control of himself and was measured in his response. Had he stuck around, maybe he wouldn’t have been as composed as he was.

As crazy as it sounds, walking away may have been the smartest move Mayfield could have made.