The Miami Heat had every reason to lay down against the Dallas Mavericks.

They were playing on the second end of a rough back-to-back against another Western Conference powerhouse. They had surrendered a massive early lead, giving the Mavericks all the momentum they needed to steal a win at home. They hadn’t mustered efficient offense since the first half, and suddenly couldn’t string together multiple stops despite the absence of Luka Doncic.

Most teams would have crumbled under the physical and mental fatigue of those circumstances, especially late in the fourth quarter and overtime. Bam Adebayo, though, made sure the Heat didn’t.

Adebayo had 18 points, 11 rebounds, and 10 assists in Miami’s gritty 122-118 overtime win against Dallas on Saturday. It was his second triple-double in the last three games, marking the first such performances of his career after failing to notch one during his first two seasons in the NBA.

Those unfamiliar with the wholly unique impact Adebayo makes on both ends of the floor may be surprised by him filling up the stat sheet. He was a dunking, shot-blocking force of power and athleticism during his one season at Kentucky, and had more than six assists in just one game with the Miami coming into 2019-20.

But Miami has been basketball’s most pleasant surprise in the season’s early going, and Adebayo’s growth into one of the league’s most versatile big men is the chief justification behind his team’s success – and could even lead to an All-Star berth.

Still, Richardson certainly isn’t the only one taking notice of Adebayo’s sweeping impact on the Heat.

Adebayo is averaging 15.2 points, 10.6 rebounds, 4.6 assists, 1.4 steals, and 1.2 blocks per gam – all career-highs. The only other players to reach those statistical thresholds this season? Giannis Antetokounmpo, Karl-Anthony Towns, and Nikola Jokic, each of whom entered the season as leaders in the MVP race.

Adebayo isn’t quite on their level. But as the linchpin of the Heat’s top-10 defense whose offensive responsibilities have broadened to include all-court playmaking, he’s emerged as one of the game’s best two-way players regardless. Case in point: The Heat’s defensive ratings spikes three points when Adebayo is off the floor, and his overall net rating is second on the team only to franchise player Jimmy Butler.

Adebayo has a legitimate case for Defensive Player of the Year as a switch-proof big man who guards all five positions and consistently disrupts the opposition’s attack. He’s a matchup nightmare on the other end even without three-point range, routinely initiating offense from the elbows, bringing the ball up the floor, and dominating the paint with soaring finishes.

The number of players who can do all the things Adebayo does on a nightly basis can be counted on one hand. 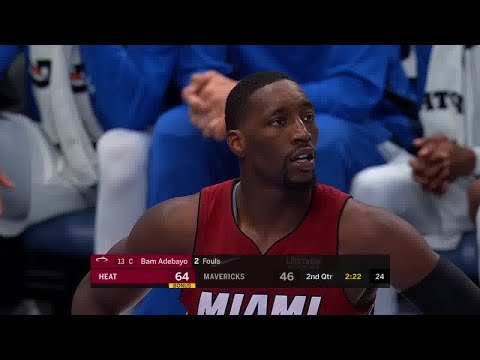 Even so, there’s no guarantee Adebayo is rewarded with his first All-Star appearance. His per-game numbers are stellar, but not the type that normally elicit All-Star hype on their own. Adebayo’s play, eye-popping as it often can be, is still rooted most in nuance that base statistics and even the eye test sometimes fails to capture.

But should he fall short of All-Star honors this season, it should be only a matter of time until Adebayo receives his proper due.

“He’s a complete player,” Butler said, per the South Florida Sun Sentinel. “The crazy part about it is he’s only going to get better. That’s the exciting thing.”