With both the Dow Jones and S&P 500 hitting record highs recently, you would be forgiven for thinking that Donald Trump’s stock market has been a runaway success. However, the recent trade war turmoil has shed light on an extraordinary fact: the Dow and S&P have gone nowhere since the tariffs began in 2018.

The stock market is now back at the same level it was in January 2018 — when Trump put his 1st tariffs on washing machines + solar panels. https://t.co/N5xzIE8oXK #stocks #trade #realitycheck pic.twitter.com/DJMVr9QPzD

There is no doubting that the Trump administration’s tax plan was a positive for the stock market. By essentially donating money to corporations, balance sheets inflated and bullish traders pumped stocks as the dream of a uber-business friendly leader had become a reality.

However, in January 2018, Trump began a protectionist tariff policy to address the balance of trade with China. This sparked a market sell-off that created a jagged sideways range. Over the last year, as traders have dealt with the contrasting fundamentals of a vibrant economy and the mutually assured destruction of taking on Beijing, volatility has increased. The Dow and S&P 500 are therefore fluctuating wildly as concerns over the trade war have oscillated.

Time is not a flat circle, it's a jagged sideways trading range. pic.twitter.com/CcLG9EMx2g

The Dow Jones closed down 767 points (2.9%) today even though dovish expectations are rising for the Federal Reserve. Kathy Lien at BK Asset Management made the following remarks in regards to the stock market’s absolute conviction that Powell will cut U.S. rates again this year:

“Between the tariffs and the 800 point drop in the Dow today (1,400 points since last Wed), investors are pricing in not one but two rate cuts this year. Fed Fund futures show the market pricing in 100% chance of a 25bp cut in September followed by 100% chance of another 25bp cut by December. This is a dramatic shift from Wednesday when the market was only pricing in a 60% chance of one more quarter-point cut in 2019.”

S&P 500 Falling in Tandem With the Dow

Showing evident symmetry with the Dow, the S&P 500 also shed 2.9% on Monday. With both indices trapped in a long-term sideways range, the broader risk dynamics are the main fundamental that stock market traders are interested in. Because of this, Donald Trump doesn’t talk about markets as much as he used to. This may be because the S&P 500 under his watch has performed worse than it did under his favorite anti-business target, Barrack Obama. 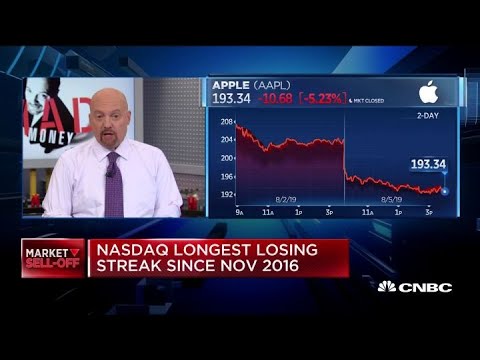 The recent volatility makes perspective hard to find in stock markets. What is clear is that Trump’s tariffs have mostly been a prison for U.S. equities.