LeBron James is a highly divisive basketball player. Some people believe he is one of the greatest players of all time, whereas others believe he is massively overrated.

Whatever the case may be, the 34-year-old still has claimed three NBA Championships – one of which he almost won on his own.

Many miles on the clock

Having entered the NBA in 2003 as the first-round draft pick for the Cleveland Cavaliers, James has a lot of miles on the clock.

From 2006 until 2018, James was involved in the playoffs every year. This included getting to the NBA Championship Finals in eight consecutive years from 2011 until 2018.

After playing the San Francisco Warriors for the fourth consecutive year in the Finals in 2018, James moved to the Los Angeles Lakers. For most of the 2019 season, the team was disjointed and relied heavily on LeBron.

Eventually, this heavy reliance took its toll and James injured his groin on Christmas Day. He missed a career record 17 consecutive games and the Lakers fell out of contention for the playoffs.

LeBron has a good track record of staying healthy, but at 34 years old, it takes a lot longer for the body to recover. Not making the playoffs was a blessing in disguise for James.

This gave him time to get healthy in the off-season and get himself right for the 2019-2020 season. Lakers head coach Frank Vogel is excited that his star player had an extra three months to rest up. In comparison to his 2018 season, James finished 71 days sooner this year.

Vogel said, “That’s good news for us and bad news for the rest of the NBA.”

James took some time away from training at the end of the season but was quickly back in the gym and on the court. 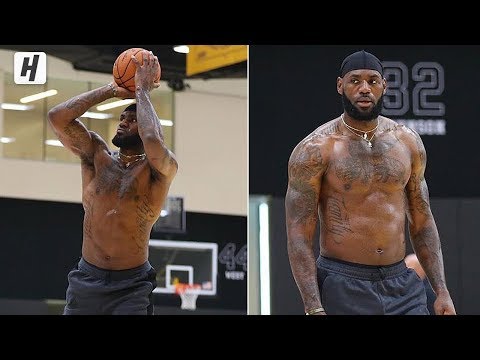 Speaking about his approach this off-season, James said, “I ramped it a lot more over the last couple of months from late April to August and September.”

LeBron is motivated to reclaim his throne as the top player in the NBA this upcoming season. His former Cavaliers teammate Kendrick Perkins tweeted out his ranking of the top ten players in the league.

LeBron was not happy with being in second place and texted Perkins saying, “In due time I will reclaim my throne.”

What chance do the Lakers have?

When James moved to Los Angeles, a lot of experts believed his off-court interests would hinder his appetite for basketball. Some of these experts may have felt vindicated after the team did not make the playoffs.

The Lakers are now much changed following the off-season. The roster, coaching staff and the front office have transformed, with LeBron joking that “the only thing that is the same is the floor and the trophies up there.”

There are now numerous players on the roster that have Championship rings and know how to win. Last season, the team struggled as it was full of young players that needed time to develop.

Questions still exist about the exact role of James in the team and the ability of the roster to be a strong defensive team without giving up tons of fouls.

However, if the team can mesh well together, James can lead the team to the playoffs. Once they are in the playoffs, anything can happen.