Conor McGregor returns to the UFC on Jan. 18 against Donald ‘Cowboy’ Cerrone, his first fight since losing to Khabib Nurmagomedov in October 2018. The bout will be McGregor’s third UFC fight contested at 170 pounds, but let’s be clear: the former 145 and 155 pound champ is no true welterweight.

His first tilt at that weight came against Nate Diaz on account of Nate being a late replacement opponent with just a week to prepare. After McGregor lost that fight via submission, he demanded the rematch go down under exactly the same circumstances. Now he faces Cerrone, whose last five fights have been contested at lightweight.

Speaking to his own news outlet The Mac Life, McGregor made it clear what he hates the most about fighting. 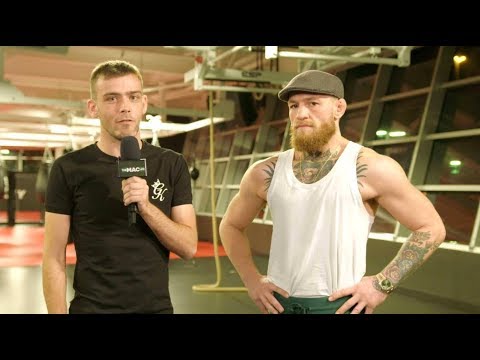 ”If there’s two things that’ll keep me away from this game, it’s the intense media obligations and the weight cuts and that’s it. They always come together at the same damn time. There’s a lot of work involved in the media, and a lot of different type of energy. And then of course factor in you’re cutting weight. It’s not enjoyable at all. The weight cuts are ruthless.”

At the time, the Irish sports star was stumping for the creation of a new 165 pound weight class. Unfortunately for him, the UFC wasn’t interested. So rather than continue to restrict his diet and sap his endurance to hit lightweight, it looks like McGregor has opted to compete at welterweight instead. For this fight, anyway.

According to ESPN’s Ariel Helwani, McGregor plans to fight three times in 2020, culminating in a rematch with Nurmagomedov in Moscow should the Dagestani grappler still hold the lightweight title. That busy pace jives with comments McGregor made on Instragram earlier in the year where the Irish fighter seemed to blame his recent boxing and MMA defeats on the long breaks between bouts.

“We can all work hard for a minute. It’s the consistency to do it over and over and over again that will lead you to these iconic moments. Year after year of focused work! I worked hard my last two fights. No doubt. But without consistency, I fell short.”

Fighting three times in 2020 would be quite the run for Conor McGregor, and taking tough weight cuts out of the equation unless fighting for a belt lowers the physical and mental toll greatly. Those following McGregor’s Instagram may have also noticed the former featherweight competitor is training and working out like a maniac. We’ve never seen ‘The Notorious’ looking as big or musclebound as he does these days, just another sign that fighting at 170 is a strategic decision.

Going all bulk with just a water cut for the next two fights could result in a significantly larger and stronger McGregor standing across from Khabib Nurmagomedov at the end of 2020 … if all goes according to plan.

How It Could All Go Wrong

Conor’s past welterweight opponents were basically puffed up lightweights. If ‘The Notorious’ makes the mistake of challenging a real welterweight after Cerrone – someone like Jorge Masvidal who reportedly walks around north of 190 pounds, for example – he could find himself in a lot of trouble.

Being the smaller man means more than just a strength advantage for your opponent. Knockout ability is often affected negatively when a fighter is giving up size. And more muscle can hurt endurance and shave precious milliseconds off speed.

McGregor’s team are undoubtedly attempting to minimize those cons while maximizing the pros of fighting at welterweight. How their planning and preparation play out in the cage over the coming year is just another fascinating element to follow as the former double champ attempts to climb back to the top of the UFC.