The Dow Jones continues to trade higher, even as a mountain of concerning fundamentals have built up both in the U.S. and abroad.

Unprecedented economic crisis aside, there are bullish things happening for the Dow, with the dollar weakness quietly helping to drive the stock market higher.

The Dow Really Is Brushing Off a Ridiculously Toxic Risk Cocktail

The stock market recovery is growing more extraordinary by the week.

As though a historic economic downturn and labor market plunge wasn’t enough, civil unrest has battered many small businesses when they were already at their most vulnerable.

Consumer confidence could take a significant hit in the critical economic engine areas such as Los Angeles and New York, right as things were finally looking up.

I’m afraid the bad news keeps on coming, as Donald Trump and China have butted heads to the extent that relations are arguably at multi-decade lows.

Beijing has flirted with ripping up the phase one deal and is rumored to be canceling agricultural purchases over the United States’ opposition to its actions in Hong Kong.

While investors have been enthused by the White House’s restraint in diving in with more tariffs, this is a typically shaky “positive” for the Dow Jones’ latest bull run.

So Why Is the Stock Market So Defiantly Optimistic? 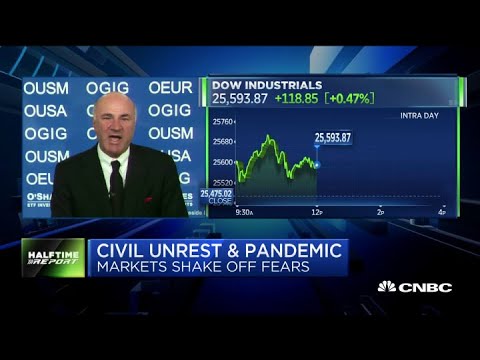 The simple answer that economic activity is picking up, even if rioting and curfews are creating headwinds in major metro areas.

Another vital factor that rarely features in popular stock market analysis is that Wall Street belongs to the machines. Trading algorithms and vast data operations ensure that information gets priced in at a rate that would give retail investors whiplash.

As senior Nordea economist Sebastian Galy told CCN.com, even another dire NFP reading this week may not hurt the stock market:

Non-Farm payroll on Friday is expected to drop by 8 million and will likely cumulatively peak at 34 million next month before starting a rebound.

Unemployment claims already told us much of this information as well as newspapers and other sources of information so that a miss which is quite likely is unlikely to have too much of a negative impact on the equity market.

The Dow Jones Catalyst No One Is Talking About

Yet there’s one insanely potent Dow Jones catalyst that even fewer people are talking about. It’s the weakness in the U.S. dollar.

With so many huge multinational corporations making up the index, their earnings are magnified when the USD falls.

For a corporation like Dow giant Apple, a weak USD is an incredible benefit.

This immediately improves their earnings numbers, and – at least in theory – increases their stock value.

It also encourages investors in cash to seek an alternative place for their capital. With interest rates ranging near zero, this almost always means the higher-yielding equity market.

You can’t downplay the massive benefits a softer dollar brings to the global economy, as developing nations have vast amounts of dollar-denominated debt, and this gives them some breathing room.

Of course, all these positives only make sense if the valuations are sensible. With Warren Buffett’s indicator screaming that everything is insanely overpriced relative to value, it’s definitely easier to have a negative outlook.

Perhaps this is the exact reason why there are a lot of irate bears on Wall Street. Fighting the Fed has proven to be a fool’s errand for those trading the broader market.

At least so far.