Tesla (NASDAQ: TSLA) stock surged to a record high above $500 a share on Monday as bullish abandon engulfed the United States’ most valuable car manufacturer.

The big question for Wall Street bulls is just how much of this rally is related to a successful push into China, and how much is linked to a historic short-squeeze.

Amid the pure euphoria of proving the naysayers wrong, Tesla investors have driven the stock within striking distance of a $100 billion market cap.

This milestone would earn Elon Musk a massive payday, but this is peanuts compared to what the rally has done for the billionaire’s net worth.

For investors trying to maintain a level head, there is a nagging issue with trading TSLA. It’s difficult to know how much of the recent move to the upside is thanks to the short squeeze and how much is built on fundamentals.

Wall Street tried to bury Tesla with shorts, and it nearly succeeded as the stock fell well beneath $200 in 2019.

When the tables turned with impressive earnings reports and brighter fundamentals, brow-beaten Tesla shares skyrocketed. Correlation between reduced short-interest and a rising share price has been impossible to ignore.

Ironically, overcrowding could now be a problem for TSLA bulls. Bearish interest has plunged over the past 12 months.

Despite the increased opportunity for the few bears who weathered the storm, there’s still a reason to proceed with caution. Yes, the popular “RSI” technical indicator has returned to overbought status on Tesla stock (with some divergence to boot), but the long-side almost always has an edge when it comes to equity trends.

According to this theory from legendary billionaire hedge fund manager Martin Taylor in Jack Schwager’s book, Hedge Fund Market Wizards, TSLA could still have plenty of distance to run despite its steep spike:

If a stock is extremely oversold—say, the RSI is at a three-year low—it will get me to take a closer look at it. Normally, if a stock is that brutalized, it means that whatever is killing it is probably already in the price.

RSI doesn’t work as an overbought indicator because stocks can remain overbought for a very long time. But a stock being extremely oversold is usually an acute phenomenon that lasts for only a few weeks.

If correct, this means that it’s going to take a significant shock to break Tesla’s uptrend.

This is where China comes in. 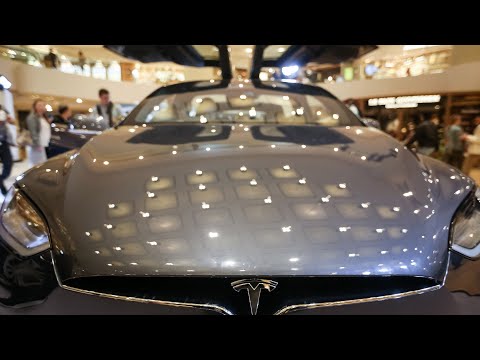 Elon Musk has staked a large portion of the company’s future on its relationship with the world’s second-largest economy.

Beijing is aware of its pollution problem, and Musk’s EVs seem to be a match made in heaven for a country that adores US brands and makes up 50% of the global market for electric cars.

The problem is that China has some serious economic headwinds. Aside from the trade war with the US, slowing growth and spiraling debt have numerous economists fearing a hard landing.

Musk himself has stated that without China, many of his production goals for the Model 3 would be impossible to achieve.

But while a much-less crowded short trade may be great news for Tesla bears, it will be hard to break TSLA’s spirit if Elon Musk keeps dancing with delight in Shanghai.

Bullets are no good without gunpowder.