Nintendo probably has a brilliant plan for this fall. There are rumors of Mario and Zelda remasters, and there’s even a possible Breath of the Wild 2. Do you know what it doesn’t have? Viable next-gen hardware.

The Nintendo Switch is great. It has lead the Big N to a very profitable generation so far. But its cracks are starting to show, specifically in the hardware’s lackluster power.

This weakness is about to become more evident.

According to Nintendo Life, “The Gunk” developer Image & Form went to Microsoft for its next title, mainly because the Switch couldn’t handle its complexity. This is a developer that primarily makes games for Nintendo first.

From the beginning, I think we thought The Gunk was going to come to all platforms, but we realised that it’s such a complex game and it requires so much power.

So we decided let’s see who can we talk to who has really powerful hardware. And then we talked to Microsoft and they really liked the game, like instantly.

The Switch wouldn’t do for them anymore. With the PlayStation 5 and Xbox Series X releasing soon, the Switch’s lack of power is a massive problem. Nintendo needs to upgrade.

A Less Than Ideal Experience

Titles like Doom Eternal, The Witcher 3, and The Outer Worlds run on Switch, but not very well. The Outer Worlds has some of the muddiest textures seen this generation–a less than ideal experience.

While that’s a technical miracle in its own right, most developers won’t have the time nor the desire to port over. Make that double once next-gen flexes its power.

Keep in mind that The Gunk, a fine-looking game in its own right, doesn’t appear a technical marvel by any stretch. What about upcoming titles like Dying Light 2, Far Cry 6, or even this generation’s Avengers title? 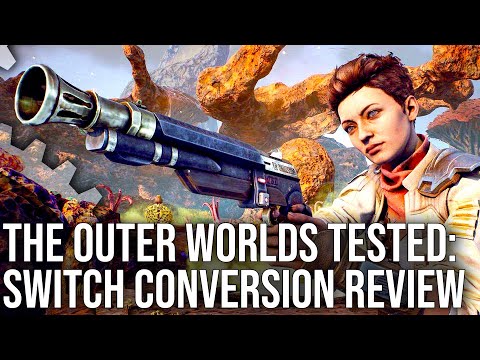 If a game like The Gunk can’t run on Switch, how can we expect top-tier next-gen games there? Hell, what can games like Breath of The Wild 2 improve when the original already struggled at launch?

Nintendo certainly isn’t doomed, but it needs some way to compete, and it needs that within the next twelve months.