Much like speedrunners complete games as fast as possible according to a defined set of parameters such as achieving 100% completion or a specific ending, DarkViperAU took on the gargantuan task of beating GTA 5 while killing as few people as possible, in a so-called “Pacifist% run.”

For a game with murderous criminal activity as its central feature, that’s one tall order.

You can see how the mission usually plays out in the video below. 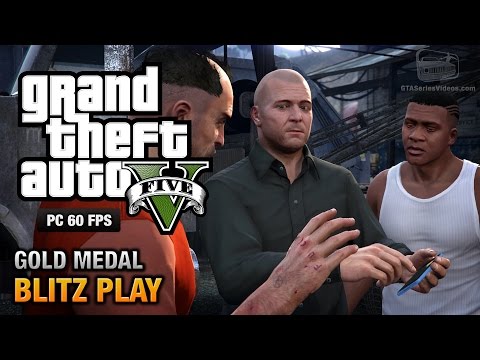 One of the core objectives is to clear out multiple waves of cops, snipers, and heavily armored Noose squads. There’s also a helicopter to take down.

Part of the mission’s progression banks on killing a certain number of these NPCs, whose deaths trigger successive phases, making DarkViperAU’s task an almost impossible one.

Through the clever use of Grand Theft Auto V’s three-character switching mechanic, he’s able to coax one of them into downing enemies while not directly controlling them himself. The Pacifist% run dictates that the player must not directly kill anyone, but allows for AI-controlled characters to kill as long as the player isn’t controlling them.

DarkViperAU’s main tactic involves bringing a tank to the firefight, endowing AI-controlled protagonist Franklin with the firepower to take out the waves of enemies. Obtaining the tank represents a conundrum in itself.

DarkViperAU has to call in a taxi mid-mission to travel to the tank, pick it up, and drive it back to the area without timing out the mission. To by-pass Grand Theft Auto V’s strict mission de-sync rules, he has to continuously swap between the character driving the tank and one within the mission area.

Having memorized the exact timing, he counts aloud to ensure he doesn’t miss the cut, painstakingly snaking the tank across Los Santos’ urban sprawl in eight to nine-second surges.

Aside from obtaining the tank, there are numerous other factors to take into account to ensure the mission progresses.

DarkViperAU strategically places cars in specific locations to have the non-controlled protagonists behave in a certain manner. He purposefully fails the mission early on to make a tow truck destructible. Doing so grants a line of sight for the tank to down enemies located behind it.

My rather pedestrian appreciation for DarkViperAU’s knowledge undoubtedly means I’ve missed countless other little tricks. It’s 33 hours of trial and error, fine-tuning, and perseverance boiled down to a precise series of calculated actions.

Check out the full build-up in DarkViperAU’s stream below (from the 8:31 mark):

The successful run was a tense affair. Not everything went to plan. Non-controlled Franklin edged the tank further forward than required, obscuring his vision of enemies. DarkViperAU was forced to coax out the NPCs as best as possible. Ultimately, the stars align, and he completes the mission.

Once he passes a crucial checkpoint and the Pacifist run is a certainty, his euphoria is palpable. He’s momentarily lost for words, and it’s hard not to share in his pride at having surmounted the challenge.

Here’s a clip of the culminating moments of the mission:

For those interested, he currently has an on-going Pacifist% series on YouTube that recounts his various exploits in GTA 5.