This week, major browser operator Opera has integrated a feature to purchase crypto into its Android app less than three months since announcing its plans to further explore blockchain technology.

With a partnership with Safello, a European crypto exchange, users are now able to purchase cryptocurrencies directly from the Opera browser.

“With Safello brokerage on the Opera mobile browser for Android, both new and experienced users can now easily transact cryptocurrencies in the most secure and fastest way possible. The functionality to purchase crypto is right at their fingertips.”

The announcement of Opera comes in a period in which other large-scale technology conglomerates like Samsung are rumored to be in the process of integrating native crypto support.

Opera and Samsung Initiatives are Crucial For Mainstream Bitcoin Adoption

Following many security breaches, hacking attacks, and cases like the recent QuadrigaCX fiasco wherein the CEO reportedly died holding the private keys to $150 million in digital assets, the confidence in the cryptocurrency industry from investors has declined.

While leading Bitcoin industry companies in the likes of Coinbase, Gemini, Kraken, and Binance have strengthened the infrastructure supporting cryptocurrencies, the perception of the industry by mainstream users and investors remains generally negative.

For the long-term growth of the cryptocurrency sector, it is crucial to have large-scale institutions and companies to build within the digital asset ecosystem and increase the awareness of the asset class.

The recent integration of a cryptocurrency purchasing feature by Opera presents a small step toward increasing the adoption of digital assets in major markets.

As SamMobile and other local publications reported extensively, Samsung, South Korea’s largest company, is rumored to be integrating a cryptocurrency wallet, potentially led by Samsung Pay.

If Opera continues to add cryptocurrency-related features onto its platform and Samsung Pay oversees the implementation of a cryptocurrency wallet, the asset class would gain mainstream exposure to two large markets in the browser and mobile phone markets.

“We think that the next important phase for crypto will come from usage and that for it to reach wider adoption, it has to be easy to buy and easy to use. We believe that the browser will be the entry point for these use cases.”

For Mainstream Bitcoin Users and Investors, Recognition is Necessary

Whether it is for targeting institutional investors or individual users, the importance of recognized organizations demonstrating a high level of involvement in an asset class cannot be understated.

Earlier this week, on the Unconfirmed podcast, Dan Morehead, the CEO of Pantera Capital, the first billion-dollar cryptocurrency fund, said the emergence of ICE’s Bakkt, Fidelity, and ErisX could drive institutional investors into the market.

“Now we have firms like ICE’s Bakkt, Fidelity, or ErisX doing varying institutional custody and over the months, I think that will help bring institutions in. The one thing that is true though is institutions are like the rest of us. They’re pretty pro-cyclical and the big wave of institutional money will probably not start until the prices themselves start going up,” Morehead said. 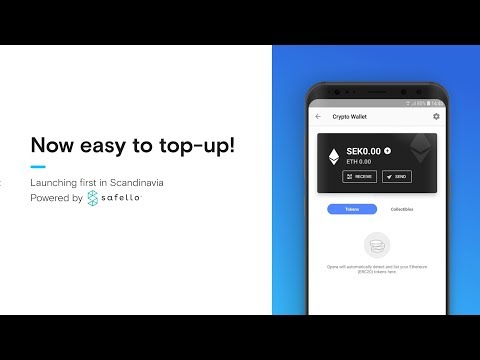 Although unlikely in the short-term, some analysts believe the Opera integration may also lead other major browsers to integrate cryptocurrencies in the long-term if, as Twitter CEO Jack Dorsey believes, Bitcoin or any other cryptocurrency becomes the native currency of the internet.

Brave, another cryptocurrency-focused browser, is said to have millions of active users and content creators who are incentivized using digital assets.