By CCN.com: Elon Musk has taken to Twitter to question the army of Tesla haters that bet against Tesla stock.

In an exchange with Y-Combinator co-founder Paul Graham, Elon Musk acknowledged that his company is targeted by a “fleet of haters” unlike anything else in the industry.

Graham initially asked his 1 million + Twitter followers to explain the animosity towards the electric car company:

“Tesla has a fleet of haters who must search for tweets mentioning the company in order to reply to them. I’ve seen plenty of haters before, but never such proactive ones. Who are they? Car dealers? People who shorted the stock? Bots?”

Bizarre discovery: Tesla has a fleet of haters who must search for tweets mentioning the company in order to reply to them. I've seen plenty of haters before, but never such proactive ones. Who are they? Car dealers? People who shorted the stock? Bots?

Who are Tesla haters? Musk responds

Musk jumped into the conversation, stoking a string of responses from the pair’s combined millions of followers.

Musk is referring to the well-oiled army of analysts and commentators that spread negative news about Tesla. On Twitter, this group uses the hashtag $TESLAQ – the Tesla ticker followed by a Q which denotes “bankrupt” – to publish critical commentary on Tesla and its founder.

On the stock market, this manifests in an unprecedented volume of short-sellers betting against the stock. In April this year, 27.7 percent of all available Tesla shares were sold short (borrowed by traders who intend to sell them when the price crashes and pocket the difference).

In a report by the LA Times, one portfolio manager says the anger is directed at Musk himself:

But Paul Graham isn’t so sure. Replying to Twitter followers on his thread, he argues there are “other companies with flamboyant CEOs.”

There are other companies with flamboyant CEOs though. That doesn't seem enough to explain this. Something more is going on here than ordinary hating. I don't know what, but it feels different.

Elon Musk also weighed in on the apparent media bias from CNBC. Commenting on Paul Graham’s initial thread, one user asked if Musk had seen a video that reportedly edited out positive Tesla commentary.

Did you see @CNBC edit out @chamath Tesla segment today?

Social Capital founder Chamath Palihapitiya appeared on CNBC, but allegedly had his comments on Tesla removed.

The full interview was later released by CNBC in which Palihapitiya called Tesla the “clear winner” in electric cars. 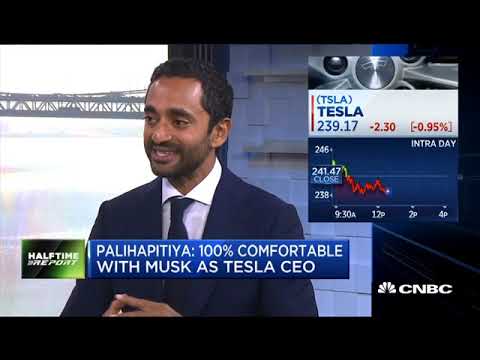 An army of “conspiracy theorists and short sellers”

Paul Graham ultimately concludes that Tesla hatred stems from conspiracy theorists and short-sellers with an agenda to crush Tesla stock.

Whoah, I had no idea. Conspiracy theorists and short sellers have converged. How very strange. Are there any other companies that have this sort of antiposse?

Much of the narrative among Tesla haters revolves around poor demand for Tesla cars. They take photos of warehouses full of Tesla vehicles and claim Tesla is stockpiling cars it can’t sell.

Tesla maintains these are simply distribution sites used before vehicles are shipped to buyers.

For now, Musk continues to battle against short-sellers and Tesla haters.