Collector’s Editions are a pretty crazy idea a lot of the time. Like back when Fallout 76 came out and lied about that canvas bag. Or that time that Dead Island: Riptide came with a mutilated chest for some reason. Now Spongebob Squarepants: Battle For Bikini Bottom – Rehydrated is getting in on the action.

At least, it sort of is. It’s not like this collector’s edition comes with anything particularly insane or anything. It’s the standard collector’s edition fair: figurines, postcards, and keychains. No, the weird part is this is a $300 edition of a game about Spongebob.

There’s something sort of appealing about all of this. Spongebob Squarepants: Battle for Bikini Bottom – Rehydrated has proven to be a popular title, despite supposedly receiving “mixed to average reviews”. This F.U.N version looks pretty high-quality all things considered.

The level of effort being put in is either impressive or baffling. I mean, it’s a game about a talking sponge. Don’t get me wrong, I sort of love Spongebob. There’s nothing better to put on when you’re hungover or feeling depressed and nostalgic.

But, going to this extreme for a Spongebob game is mental. 3 8″ figurines. 6 art cards. 5 keyrings, and a pair of replica Spongebob socks. I know that Nickelodeon loves merchandising but this is far even for them. Not that it’s bad, just weird. 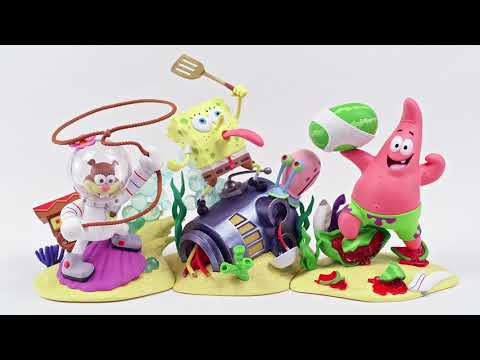 The oddest part about this whole experience is just how high quality it is. Don’t get me wrong it probably doesn’t justify $300, but it’s already looking more worthwhile than 80% of the collector’s edition out there. Plus it actually includes the game which is something you wouldn’t think needs saying, but apparently it does.

Spongebob Squarepants: Battle for Bikini Bottom – Rehydrated is going to be out by the end of the month. Despite my own confusion about this edition’s resistance, I sort of want to get one. I haven’t even watched the show in years, and I never played the game when it originally came out.

I guess that’s the marketing power of Collector’s Editions for you. No wonder this thing exists.