By CCN.com: As expected, Uber’s earning report delivered a quarterly loss of $1 billion. Management must be working out how to dupe drivers into generating more revenue for the ridesharing play as traders pile on to short the stock.

Uber Doesn’t Care About Its Drivers

Uber has never been kind to its workforce. Rideshare effectively strips the equity out of a driver’s vehicle by accelerating its depreciation with enhanced use while Uber trumpets that it allows people to monetize their wheels.

The ridesharing company promised pie-in-the-sky annual earnings and set up drivers with ripoff automobile financing. Uber has pulled out the stops in getting suckers to drive for crappy net hourly pay.

Uber’s earnings report proves it must subsidize every ride so it can screw drivers with lower pay as it tries to gain market share. It has a “confusing road to profitability,” as Loup Ventures’ Gene Munster discusses in the below CNBC clip:

Now comes Uber’s latest scam. It’s just like Lyft but in conjunction with one of the worst companies in the world:  Fair.com.

The scam: Uber-Fair drivers get a car from Fair.com for only $185/week. That fee is reimbursed if the driver does 70 trips/week.

Except for the fact that one can get a Fair.com car for $185/month and drive Uber without having to hit minimums. While there is a startup fee that may run between $700 and $1000, that amount can be amortized over two years to yield a total payment of $225 per month.

It’s a stupid deal that won’t help Uber’s earnings report next time and has even fooled guru The Rideshare Guy: 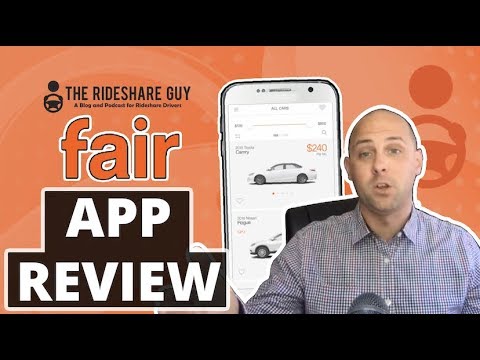 That’s not even the worst of the Uber-Fair scam.

Fair.Com Has the Worst Customer Service in History

Fair.com’s customer service is literally the worst I’ve encountered in my entire life.

Their “concierge” always had me on hold for an eternity. I usually gave up, preferring not to decay into a skeleton waiting for them.

The chat feature on their app typically had a wait time of 20 minutes or more. Their callback technology never worked.

Reps were always inept and unable to address my problem. I’d be referred elsewhere, requiring me to wait even longer and problems still never got resolved.

When I picked up the vehicle, the tires were bald, the car needed $125 in repairs, and there were scratches all over it. The dealership rep couldn’t have cared less.

I was told I could return the car within three days. But by the time I was told that more than three days had passed.

I sent letters to the COO who never replied.

I did find a secret email address where issues get resolved: WeAreFair@Fair.com.

You want no part of this “deal” from Uber, nor do you want a car from Fair.com.

Scammy birds of a feather obviously flock together.

Then again, there’s no surprise.

Uber used to own Fair.