As the co-founder and former CEO of Uber Technologies (NYSE: UBER) Travis Kalanick cuts his stake in the ride-hailing firm, the current CEO Dara Khosrowshahi is increasing his shareholding in the company.

An SEC filing posted on November 20th shows that Khosrowshahi acquired 250,000 shares of Uber on Monday, November 18th. This brings his total stake, including stock awards, to 1,530,939 shares.

On Monday shares of the ride-hailing firm ranged between $26.30 and $27. Assuming he acquired the stake at the day’s high of $26.30, Khosrowshahi spent at least $6,575,000 to purchase the batch. As of Wednesday’s close (November 20th), Uber’s stock had appreciated by nearly 7% from Monday’s low.

But as Khosrowshahi was increasing his stake, Kalanick was continuing his selling spree that started right after the expiry of the lockup period earlier this month. On November 18th, Kalanick sold 2,121,290 Uber shares. This brings the total number he has disposed of so far to more than ten million.

As of November 13th, Kalanick had sold a stake worth about $664 million. The new SEC filing also shows that besides the Monday transaction, Kalanick sold another 4,308,839 shares towards the end of last week. This is a stake worth roughly over $110 million. The total value of the stake that he has so far sold is worth more than $829 million.

Travis Kalanick’s co-founder is also in the exit lane

Though not as aggressively as Kalanick, Uber co-founder Garett Camp has also disposed of a significant chunk of his stake. Since the lockup period expired, Camp has sold 760,000 shares of the mobility firm.

Camp has retained a stake amounting to 72,862,774 shares giving him a bigger percentage in Uber than his co-founder Kalanick. As of November 18th, Kalanick’s remaining stake amounted to 65,232,357 shares. If his selling trend is anything to go by, the stake could further dwindle.

Since the end of the 180-day lockup period, Kalanick has been selling batches of Uber shares on every single day that the market has been open. While it is not clear why Kalanick is dumping Uber shares so aggressively, he has since being kicked out of the mobility firm embarked on a new venture. This is the kitchen rental startup CloudKitchens. He has so far injected $300 million of his money into the venture.

Is Dara Khosrowshahi the lone director piling in?

Khosrowshahi is not the only Uber director who has taken a bullish view of the mobility amidst a bearish onslaught. The chairman of Uber’s board, Ronald Sugar, purchased 35,000 shares in the first week of the lockup period expiring. 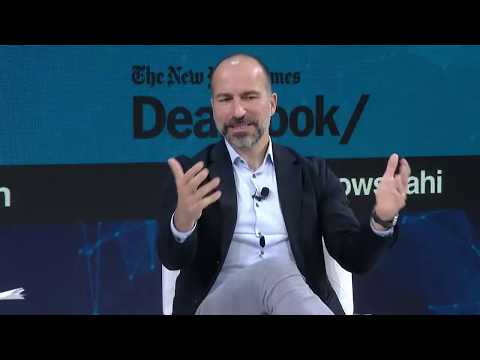 While the CEO and the board chair being on the buy-side does not necessarily suggest confidence in a company’s future, it is notable that the selloff seems to have subsided. After falling by about 8% to a record low of $25.67, the stock has now recovered to around the same level it was on November 5th. Uber’s market capitalization is now approaching $48 billion.