After imploding poll numbers took the wind out of Kamala Harris’ sails, the California senator withdrew her presidential bid Tuesday.

In an announcement on Medium, Harris said her presidential campaign “simply doesn’t have the financial resources” to continue. She also took a dig at billionaire Democratic hopefuls Tom Steyer and Michael Bloomberg:

I’m not a billionaire. I can’t fund my own campaign. And as the campaign has gone on, it’s become harder and harder to raise the money we need to compete. In good faith, I can’t tell you, my supporters and volunteers, that I have a path forward if I don’t believe I do.

But Kamala Harris’ respectable third quarter fundraising haul of $11.6 million put her in the primary’s top tier. It’s possible that her donations have dried up as quickly as her poll numbers in the wake of her highly publicized spat with Tulsi Gabbard in November’s Democratic debate.

Days after the debate, Harris’ poll numbers dropped by more than half. Although she qualified for December’s debate, she remains in the low single digits nationwide and in early primary states.

Tulsi Gabbard kept her response to Kamala Harris positive, but her supporters cheered. 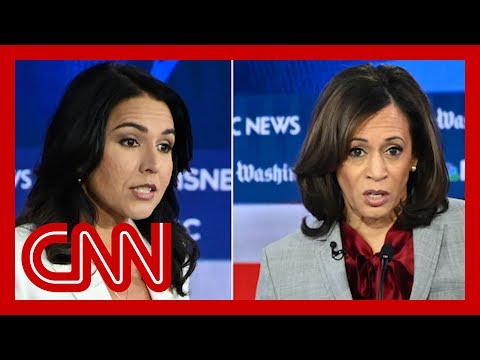 What Senator Harris is doing is unfortunately continuing to traffic in lies, and smears, and innuendos, because she cannot challenge the substance of the argument that I’m making, the leadership and the change that I’m seeking to bring in our foreign policy. Which only makes me guess that she will as president continue the status quo.

In a post debate CNN interview Harris says she “went there” with Tulsi Gabbard because she was asked the question.

But the ferocity of her attack may have been planned in advance, much like her attack on Joe Biden in the first debate seemed to be.

Polls at the end of October by USA Today and CNN found Gabbard leading Harris by one point nationally, and two points in New Hampshire.