In a press conference this afternoon, Donald Trump took a mandatory few moments to express his condolences to George Floyd.

But that just was the sugar he used to coat the pill he was about to force down our throats.

He proceeded to express his genuine remorse over how police have been treated.

He then announced that he would be using brute force to end the Black Lives Matter protests.

My fellow Americans – My first and highest duty as President is to defend our great Country and the American People. I swore an oath to uphold the laws of our Nation — and that is exactly what I will do… pic.twitter.com/pvFxxi9BTR

Trump claimed to be an “ally of all peaceful protestors.” He went on to talk about those “thugs” he mentioned over the weekend:

In recent days our nation has been gripped by professional anarchists, violent mobs, arsonists, looters, criminals, rioters, Antifa, and others.

Trump, clearly reading a speech he didn’t memorize, said he would fight to keep the “peace-loving” members of our poorest communities safe.

Has anyone informed Trump as to why these protests are happening in the first place? Our most vulnerable communities are protesting because they feel utterly unsafe. Now he’s going to forcefully put an end those protests?

He vowed to send extra police, National Guard, and possibly military their way.

He said he will “dominate the streets,” adding that if governors don’t act,

I will deploy the United States Military and quickly solve the problem for them.

In one of the most tone-deaf sections of his speech, Donald Trump defended the police, saying, “New York’s finest have been hit in the face with bricks.”

‘New York’s finest’ have also been plowing into crowds of people with SUVs.

And they are brandishing ‘white power’ signs.

Did he mention any of that? No. Not a word.

Not long before Trump had a photo-shoot with a bible, Washington D.C. police shot rubber bullets at the peaceful protestors to clear the way.

So what is it, Trump? Are you an “ally of peaceful protestors,” trying to “dominate the streets”?

The answer is quite clear.

He hasn’t flip-flopped this much since his ever-changing COVID-19 response.

How Do Conservatives Feel About Lockdowns Now?

It seems like months ago, but we were very recently in the thick of nationwide lockdowns. Right-wing activists had grown sick of the government intervening in their lives.

They stormed places like Lansing, MI, armed to the teeth — with little-to-no resistance, of course. 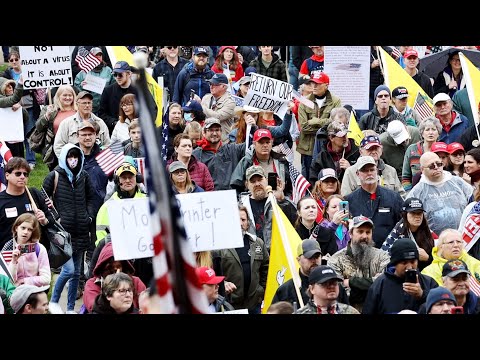 Now that the president is enforcing strict lockdowns and curfews, do they still feel the same way?

It doesn’t appear that way, now that the government is working in their favor.

There are still countless videos of unarmed black men getting murdered by the police, and the victims are being silenced once again.

Trump opened his speech by saying:

I swore an oath to uphold the laws of our nation and that is exactly what I will do.

Let us know when you start.