Speaking to the media this week, Trump hailed the four firms – each of which is worth more than $1 trillion – as evidence of his presidency’s success.

But if campaign donations at these companies are anything to go by, insiders at the four tech giants wouldn’t be caught dead chanting the MAGA slogan or wearing the famous red hat.

Apple insiders, for instance, are donating only $1 to the Trump campaign for every $55 sent to his best-performing Democratic challenger: Bernie Sanders.

This despite Apple and its stock benefitting greatly from the Trump presidency.

The Tax Cuts and Job Act of 2017 reduced Apple’s tax rate by nearly 10%. This enabled the iPhone maker to return billions of dollars to shareholders via dividends and stock buybacks.

Since the tax cuts, Apple’s stock price has more than doubled.

Amazon and Google have benefitted from Trump’s protectionist tendencies too.

Most recently, Trump attacked European plans to impose a digital services tax on U.S. tech firms and threatened to pursue retaliatory tariffs. France, the leading supporter of the tax measure, bowed to the pressure – albeit temporarily – thanks to Trump.

As of February 3rd, Big Tech insiders had donated overwhelmingly to candidates who have threatened to disrupt U.S. tech leviathans. All the while giving peanuts to the candidate most likely to maintain the status quo. 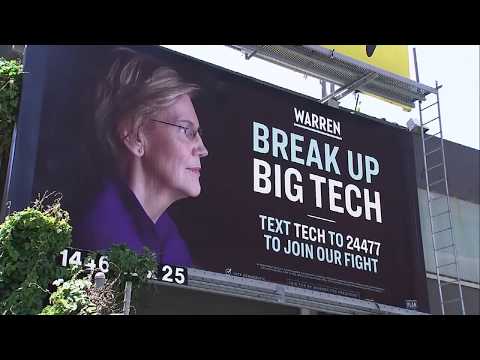 In this election cycle, the socialist-leaning Democratic presidential candidates have not missed an opportunity to bash tech giants. Bernie Sanders and Elizabeth Warren have both expressly stated that they will break up Silicon Valley’s largest companies if they win the presidency.

In December, Sanders stated in response to a question from Vox:

When in the White House, I will reinvigorate the FTC (Federal Trade Commission) and appoint an Attorney General who will aggressively investigate and break up these tech giants and other conglomerates that have monopolized nearly every sector of our economy.

Sanders is also on record criticizing Google for being “too big” and “too powerful.”

This was Warren’s response to the same Vox question:

While not expressly calling for the dismantling of powerful Silicon Valley giants, Pete Buttigieg responded that “breaking up tech companies should be an option.”

Protest vote or not, how insiders at the “MAGA club” companies are donating to political campaigns in the 2020 election cycle seems a bit baffling.

September 26, 2020 4 Comments
← PreviousGreta Thunberg Is Basically Just Kim Kardashian
Next →John Oliver’s Childish Trump Tantrum Was More Hilarious Than Any of His Jokes