As President Donald Trump continues sounding a triumphalist tone on the subject of the economy, there are developing signs that point to a brewing recession. Fear of a slowdown is the primary reason why the Federal Reserve declined to raise interest rates at the start of the year, and now it seems that these fears are well-founded.

GDP growth during the four quarters of 2018 was the fastest since 2005. This Administration is the first on record to have experienced economic growth that meets or exceeds its own forecasts in each of its first two years in office. GROWTH is beating MARKET EXPECTATIONS!

According to financial data firm Markit, the U.S. manufacturing sector in March sank to its weakest position since June 2017, driven by uncertainty caused by international trade conflicts such as the ongoing U.S.-China trade dispute. The company’s purchasing managers index – which measures orders and output in America’s industrial sector – fell from 53 in February to 52.5 in March. This comes as a significant surprise because an analyst poll showed that the expectation was for it to strengthen to 53.6.

U.S. Economy Flashes Recession Warnings While Trump Pats Himself on the Back

While experts have divided opinions on the subject of a possible U.S. economic recession, there is at least some evidence to suggest that it is not such a distant prospect. Earlier in March, CCN.com reported that U.S. unemployment figures hit a 10-month high, as the country’s barnstorming economic growth over the past year slowed noticeably.

US Initial Jobless Claims seasonally-adjusted has been steadily falling since '09, but the trend "may" be over. Looking at the non-seasonally-adjusted numbers, we're starting to see some higher YoY numbers, which will lead to higher SA numbers, "if" this continues. pic.twitter.com/ym6deF3bk1

Donald Trump’s administration has been eager to play up its economic “success” amid its myriad controversies, and a federal stimulus package alongside tax cuts had briefly looked like a magic ticket.

As federal investment slows down, however, it appears as though growth has fallen alongside it. According to the New York Federal Reserve’s projections for Q1 2019, growth will average about 1.29 percent, which is well short of the 2018 growth figure of 2.9 percent.

Even more tellingly, Commerce Department data shows that U.S. wholesale inventories grew at the fastest rate in six years in January 2019, indicating that consumer demand has slowed significantly since 2018.

The Markit index showed that the reduced index figure was driven by both demand and output, so this is almost certainly an ominous sign for the economy. At the moment, the U.S. remains out of recession as long as the index stays above 50, but whether that will hold remains to be seen. 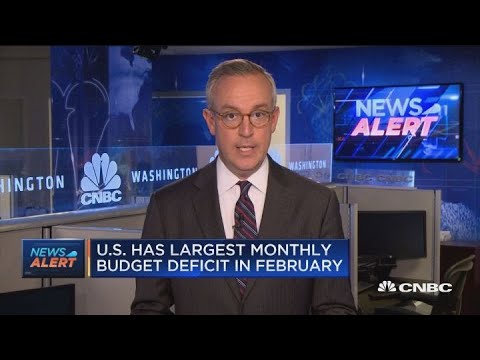 The Trump administration has pumped the deficit in pursuit of its economic stimulus plan. In February, the government expanded the deficit by $234 billion, which is the largest monthly deficit on record. The problem with this policy is that if a recession were to take place, the government would be unable to raise funds for economic stimulus from debt markets due to its already overextended position. Raising taxes would also not be an option for a government whose largest policy victory includes tax cuts.

The Fed is already feeling the heat, which is why it appears to be backing away from incremental interest rate hikes which have been going on since 2015. Any further interest rate hikes may set off a chain reaction that could only serve to make the coming recession worse.

The picture is further complicated by the fact that the U.S. housing market is positively roaring at the moment, with sales jumping a massive 11.8 percent in February alone. The February sales figure was also the biggest figure since March 2018, with home sales fueled by low interest rates.

This presents Donald Trump’s economic team with a paradox. They can continue expanding the deficit and boost the economy in the short term, which will eventually be unsustainable. Alternatively, they could rein in the deficit and almost certainly set off a recession right now.

From a political point of view, it is obvious which choice they will take.