By CCN.com: Donald Trump has again lived up to his maverick reputation. Despite worrying about hammering out a trade deal with Japan and staving off a recession that could imperil his 2020 election campaign, Trump found time to hit the golf course with Japanese Prime Minister Shinzo Abe. This was part of a three-pronged effort by the Japanese to get on Trump’s good side by appealing to the three things he seemingly loves the most: golf, wrestling, and cheeseburgers. 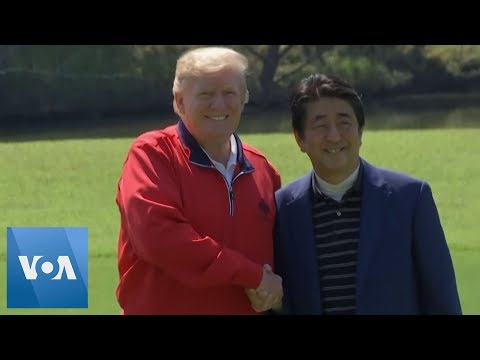 After the golf game, Trump then attended a prestigious sumo wrestling tournament alongside more than 11,000 fans at Tokyo’s Ryogoku Kokugikan Stadium where he became the first-ever American president to hand over the championship trophy to eventual winner Asanoyama. According to reports, Trump described the evening as “incredible.”

For Trump and Abe, the hard work begins on Monday, as they look to reach agreements on a range of issues including trading relationships and North Korean militarism. Speaking on Saturday, Japanese economy minister Toshimitsu Motegi stated that he does not expect even a partial deal to come out of Monday’s summit, with the process likely to drag on or weeks before a final outcome is reached. In true Trump style, he’s also got his eye on the prize – the 2020 elections.

North Korea fired off some small weapons, which disturbed some of my people, and others, but not me. I have confidence that Chairman Kim will keep his promise to me, & also smiled when he called Swampman Joe Biden a low IQ individual, & worse. Perhaps that’s sending me a signal?

Barely minutes after appearing to throw a grenade into ongoing U.S.-Japan trade talks, he expressed appreciation for continued Japanese investment in the United States, urging them to ramp it up. Speaking yesterday at the commence of high-level trade talks in Tokyo, Trump thanked Japanese investors for their longtime presence in America, singling out Toyota in particular for praise.

Soon after flying into Japan for the ongoing state visit, Trump described America’s current trade relationship with Japan using rhetoric that many analysts found ominously similar to that used on China prior to the ongoing trade conflict between both countries. Trump previously threatened to increase tariffs on vehicle imports as part of a raft of measures to address America’s $56.8 billion trade deficit with Japan. Evoking memories of his constant assertions about Chinese trade dominance over the U.S., Trump said:

“Japan has had a substantial advantage for many, many years, but that’s okay, maybe that’s why you like us so much.”

Trump, of course, is no stranger to changing his stated position on a range of issues, seemingly at will, depending on the room in which he is speaking. While this is a time-honored fact of international diplomacy, it is still quite a feat to go from issuing a statement that panicked markets to extending an olive branch to Japan within a matter of minutes.

CCN.com reported yesterday that ahead of Trump’s visit, market conditions were jittery as any sign of a Chinese-style trade conflict with Japan would likely send stocks crashing and increase the risk of a dreaded recession. It’s unclear if time spent on the golf course or an “incredible” night of sumo wrestling will make the talks go any smoother.