Pangburn, Arkansas is the quintessential slow-paced, idyllic American small town where everyone knows everyone else, and no one is in much of a hurry. Like the vast majority of rural America, the town of 600 voted for Donald Trump in 2016 after he made a successful appeal to their identity as the American “heartland,” and the president may be about to pay them back in spectacular fashion – even if no one seems to know it yet.

While news headlines have inevitably focused on crowd-pulling (though not altogether inaccurate) narratives about immigrants and coal to explain Donald Trump’s small-town appeal, they have paid scant attention to another story that starkly illustrates the sharp economic and political disconnect between urban and rural America.

Pangburn, like so many other small towns and cities across the country, suffers from an underreported problem that may hold the key to unlocking the economic potential of America’s countryside and changing the political balance of power – incredibly slow internet.

Trump’s 2020 campaign organization is backing a contentious plan for the government to intervene in 5G wireless network management. In the face of vigorous opposition from internet service providers who fear a state takeover of their turf, Donald Trump appears willing to stick his neck out for his voting base on an issue with real economic and social significance for them, which marks a departure from his usual populist red meat endeavours like Muslim bans and border walls.

While American urban areas have a penetration rate for fixed broadband access topping 97 percent, this figure falls to just 64 percent for rural households. The so-called “Digital Divide” has severe implications for rural and semi-urban areas already hit hard by the closure of mining and heavy industry as the U.S. transitions into a knowledge and technology-driven economy.

First of all, it makes it all but impossible for tech-driven economic growth to have an impact in the rural heartland, because – save for some notable exceptions like Bitmain’s cryptocurrency mining facility in Rockdale, Texas (which itself has been scaled back considerably) – businesses require significantly higher internet speeds than are often available. In Pangburn for example, residents struggle to get internet speeds anywhere approaching 1 MB/s, which means they are effectively stuck with dial-up internet speeds from the 1990s. 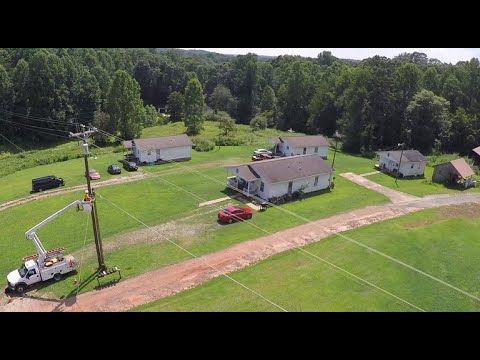 In many areas, the only connections available are actual dial-up connections which are nonetheless billed at a significant premium – up to $170/month. In such cases, the providers can get away with such outrageous practices because after making promises to provide full broadband coverage in exchange for regulatory permission to operate near-monopolies, they have decided that there is little incentive to invest in expensive fiber optic cable to link these areas with modern broadband speeds.

This lack of reliable, high-speed internet connections has two major effects on such areas. First, it basically ensures that America’s rural-urban brain drain continues to accelerate because the majority of young people who grow up in these towns are forced to move to cities where businesses generally choose to locate, in search of economic opportunities.

Tragically, this has ensured that not even the rise of remote and virtual work has had much of an effect on the declining economies of these areas because it can be a tough ask to get into a shared document or load a low-resolution YouTube video, much less stream a live video conference. As young people continue to stream out of rural areas in search of opportunities, the average age of residents of these areas has gone up, which also places significant pressure on local healthcare and municipal services.

The Politics of Patchy Rural Internet

The second effect of lack of rural broadband access is that the youth and capital flight to cities has fuelled an unspoken antipathy between rural and urban America, with both seeing each other as arrogant coastal pretenders and old hillbilly racists.

Over the past decade or so, the increasing presence of terms like “redneck,” “snowflake,” and “trailer trash” in the language of American politics has led some to draw a link between the increasing digital divide and accompanying economic gap and heightened political resentment between both halves of America.

While such claims are still very much hypothetical for the time being, it is interesting to note that the 2016 electoral college results map looks strikingly similar to a map outlining broadband adoption rates in 2014.

Of course, correlation does not mean causation, and there are several issues far beyond the scope of this article that influence block voting choices. Suffice to say, however, that there is a real possibility that access to high-speed internet – or lack thereof – has become a bona fide political issue that may play a role in deciding who becomes president of the world’s most powerful country. This is what makes Trump’s ongoing gambit very interesting.

Successive administrations have tried to address America’s growing digital divide. That includes former president Barack Obama, who launched a 2015 plan to offer billions of dollars in subsidies to providers in exchange for renewed investment in rural broadband infrastructure. These efforts met with mixed results, largely because the implementation of the promises made to the FCC was and remains pretty much at the discretion of ISPs.

Recognizing that ISPs are only ever going to prioritize shareholder returns over the politically sound notion of increasing rural broadband access, Trump’s administration is now pushing forward with a heavily contested plan to regulate how much wireless providers can sell 5G internet access for. Under the wording of the proposal, the current system of long-term spectrum leasing awarded through FCC auctions will be replaced by a rolling wholesale model resembling the electricity market.

The 5G spectrum will be taken from the Department of Defense through a Peter Thiel-backed third party company called Rivada and then resold at what amounts to a government-approved price. Under such circumstances, existing 5G providers would be forced to bring their prices down to be competitive, which would be to the mutual benefit of Trump’s rural voting base and his 2020 election campaign.

Industry players and even members of Trump’s administration like White House economic adviser Larry Kudlow are predictably not happy with the plan, which will take power out of the hands of ISPs and crucially make 5G access cheaper to rural users – who are also typically less well off than their urban counterparts. In the absence of official comment from the White House, however, Trump’s 2020 campaign team is fully onboard with it, with national press secretary Kayleigh McEnany telling Politico recently:

“A 5G wholesale market would drive down costs and provide access to millions of Americans who are currently underserved. This is in line with President Trump’s agenda to benefit all Americans, regardless of geography.”

The End Justifies The Means

Trump, on his part, has not commented on the issue, save for an ambiguous February tweet vaguely hinting at his desire for 5G to achieve adoption in the U.S.

While the jury remains very much out on whether he will be able to force through his plan in the face of significant industry and regulatory displeasure, it does seem for the moment that he is willing to deploy his maverick, chaos-theory governance model to the benefit of those who voted him and are most in need of it. As with his back-door attempt to secure funding for the border wall, Trump clearly believes that the end will justify the unprecedented means of cannibalizing the DOD’s 5G spectrum.

Ultimately, if Trump succeeds, history will remember him as the president who gave rural America broadband internet and with it, a new lease of life. If that happens, nobody will care about coal and border walls.

David Hundeyin
I am a busy Nigerian writer, journalist and writer with an interest in tech and finance. When I'm not contributing to CCN and traveling around Africa, you can catch me contributing to CNN Africa, or in the writers room at 'The Other News', Nigeria's weekly answer to 'The Daily Show' with nearly 2 million viewers. My work on 'The Other News' was featured in the New Yorker Magazine, and that was then cited in the Washington Post so I'm not sure that counts as a feature but I'll definitely mention it too! I have been nominated by the US State Department to take part in the 2019 Edward R. Murrow Program for journalists under the International Visitors Leadership Program. I also like hamsters. You can reach me on Twitter at _David_Hundeyin
Subscribe
0 Comments
Inline Feedbacks
View all comments
← PreviousFlorida Sex Spa’s Ex-Owner Sold Chinese Bigwigs Access to Trump
Next →Dow Jones: Boeing Bulls Brace for NYSE Bell After Another 737-Max Crash