President Trump's economic recovery takes a major step back at the start of the second quarter, according to the Chicago Federal Reserve's National Activity Index. | Source: AP Photo / Tony Gutierrez

By CCN.com: By now you’ve likely heard that the U.S. economy added a stellar 236,000 jobs in April. Hourly earnings ticked higher, and the unemployment rate fell to 3.6%.

The April report puts another feather in the cap of President Donald Trump who must be given credit, like him or not, for the improvements in the U.S. economy.

As he heads into the 2020 elections seeking a second term, strong economic numbers will inevitably bode well for him. For the Democrats seeking to beat him, the numbers are bad news. They’ve presented no viable economic strategy to defeat Trump, which begs the question:

“How do you campaign against economic prosperity?”

BREAKING: Unemployment near historic low. How are the Democrats going to campaign against this? "We should go back to hope and change and no cash in your pocket." #JobsReport.

While some Democrats running for president concede that the economy is doing better, their acknowledgments come with ‘buts.’ They diverge into all kinds of topics that, at the end of the day, do little to mitigate Trump’s economic successes.

Even CNN had to acknowledge that Trump’s doing something right:

“The [jobs report] comes on the heels of the announcement that the US economy grew at a much better rate than expected in the first quarter, and Trump’s performance on the economy becomes one of his prime selling points for next year’s general election.”

The network went on to reveal that based on CNN polling, Trump’s rating on the economy is “meaningfully over the 50% line.

Democrats have largely made their strategy to defeat Trump about his moral compass not pointing due north. Now that the Russian collusion narrative is as good as dead, they are trying to resuscitate it by investigating the findings of the investigation!

It’s understandable that their abhorrence of Donald Trump is causing this fixation.

However, it’s mindboggling that they don’t understand this tomfoolery will cost them at the polls. The investigations make for lots of fodder to try to put Trump in a bad light. On that same note, the intelligence of voters continues to be dismissed by Democrats who still don’t understand, “it’s the economy stupid.”

All this jazz about the Mueller report; who lied to who when and why is noise.

People are being reminded of some very arrogant comments made by President Obama. Meanwhile, his vice president Joe Biden tries to make a case that could return the country to his era.

Obama said there was no “magic wand” that Trump could wave to improve the economy. 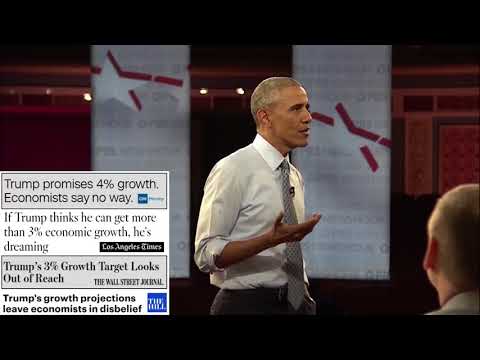 It may not be a magic wand, but it’s shaping up to be a big stick. Trump has renegotiated trade policies, lifted burdensome regulations, and taken other steps that have boosted consumer and business sentiments.

The Democrats who want to point out Trumps’ flaws to win votes are going to be in for a rude awakening come 2020 just as they were in November 2016.