By CCN.com: The U.S. will host the G7 Summit in 2020, and President Trump thinks there’s no better place for the world leaders to gather for it than one of his resorts.

However, the sheer ethical questions that are being raised are reasons this is not a good idea.

During the G7 Summit, the president said that his Trump National Doral Miami golf resort is an ideal spot for the gathering. He pointed to the property’s close proximity to the Miami airport as being one reason. 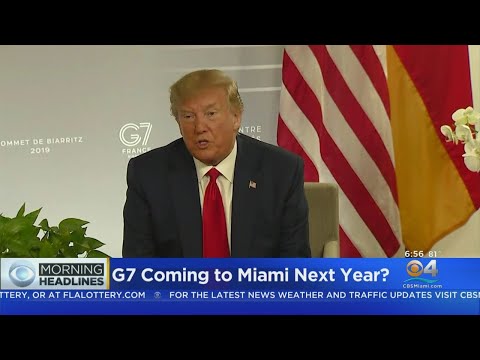 G7 summit should be held anywhere but here

The president’s suggestion immediately drew criticism, and rightfully so.

Reports are running rampant that this particular resort is struggling financially. Clearly, it would benefit greatly from being the spot for the summit for the 2020 G7 summit next summer.

The last time the U.S. hosted the event was in 2014. That was the same year Russia was expelled from the summit.

The fact that Trump is also suggesting Russian President Vladimir Putin should be readmitted to the summit doesn’t help the president’s case. Russia was expelled from the annual gathering after it annexed Ukraine’s Crimea.

There may have another ulterior motive for Trump to hold the next G7 meeting at his Doral golf course in Miami: As the host Trump "would be able to invite…Putin as a special guest, even if Putin is not a member.": NBC’s Shannon Pettypiece reported https://t.co/NbfJkbeAux

On Monday, when asked why it is appropriate to invite Russia to the gathering, Trump was all over the place, to say the least.

Trump’s known for bragging about his wealth. However, he claimed to not care about losing money on Monday.

Instead of specifically addressing questions about how he could benefit financially from the G7 summit being hosted at the Doral property, the president pointed to losses he’s already suffered after becoming POTUS.

He was referring to his losses since he became POTUS.

These issues, coupled with Trump being adamant that he did not seek the highest office of the land to line his own pockets, just doesn’t’ sit right.

Few would argue that Trump’s resort is not ideal to host world leaders. However, it can’t be dismissed that the president could benefit financially. This should never have been considered.