President Donald Trump has indicated that the preferential trade status that India enjoys with the United States under the Generalized System of Preferences (GSP) tariffs system and which allows it to export some products to the U.S. duty-free will be ended, according to Reuters.

In a letter to Congress, Trump indicated that the decision to remove India from the Generalized System of Preferences tariff system was prompted by trade difference. According to Trump, India had failed to assure the U.S. of getting ‘equitable and reasonable access’ to its markets.

Trump’s Move Will be Implemented Two months After Notice 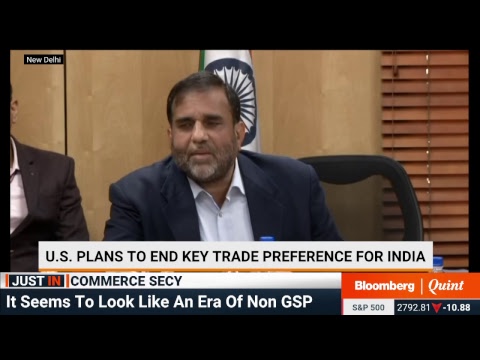 Removing India from the preferential tariff system will take effect 60 days following the notification. It will be done via a presidential proclamation. Some of the exports from India that will be affected include handicrafts, farm and marine products. This is according to the Federation of Indian Export Organizations’ director general, Ajay Sahai, who spoke to Reuters.

We fear that our labor-intensive exports of agriculture, marine and handicraft products to the U.S. would be hit hard.

Under the preferential tariff system, India exports to the United States goods worth approximately $5.6 billion annually duty-free. Anup Wadhawan, India’s Commerce Secretary, however, said that the move would have a minimal impact on India. Wadhawan argued that the GSP’s actual benefit to the country was just $190 million.

Have a Trade Surplus with the U.S.? Trump will Come for You

Per the U.S. Census Bureau, India’s trade surplus with the U.S. was worth over $20 billion between January-November 2018.

The move to drop preferential trade treatment for India has raised fears that Trump could be opening a new front in his trade wars. While it is not clear whether India will take retaliatory action, the world’s fifth-largest economy has indicated that retaliatory tariffs will be kept out of current discussions.

Currently, the two countries are engaged in discussions over various trade issues. This includes data localization, tariffs that India charges U.S. imports and new e-commerce rules. The new e-commerce rules are expected to have a significant impact on U.S. retail giants Amazon and Walmart.

Before Trump’s congressional letter, the United Nations Conference on Trade and Development had indicated that India would be one of the major beneficiaries from the trade tensions between the United States and China. According to NDTV, India was exported to see export gains of approximately 3.5 percent from the ongoing U.S.-China trade tensions.

Trump’s action comes less than a week since he lambasted India for being a ‘very high-tariff nation’. He made the remarks during an address at the Conservative Political Action Conference over the weekend, according to Bloomberg. While using the example of iconic U.S. motorcycle brand Harley Davidson, Trump said he wanted taxes charged on Indian exports.

When we send a motorcycle to India, it’s a hundred percent tariff. They charge 100 percent but when India sends a motorcycle to us, we brilliantly charge them nothing. So, I want a reciprocal tax or at least, I want to charge a tax. It’s called the mirror tax, but it’s reciprocal.