Tilray’s stock has fallen nearly 15% since yesterday when they reported larger-than-expected second-quarter losses after the market closed. Overall, the company’s net loss increased to $35.11 million, or 32 cents a share.

Cannabis-related stocks have been steadily dropping over the past few months. Major companies like Aurora Cannabis, Canntrust, and Canopy Growth have seen their stocks drop by more than 30% since May. Even though Tilray can’t escape the slide, that doesn’t necessarily mean the record-setting company is in trouble.

Tilray’s disappointing second-quarter comes despite the Canadian pot company exceeding revenue expectations. According to IBES data from Refinitiv, analysts predicted Tilray’s revenue to be around $41.1 million but they ended with $45.9 million. And the sell-off continues even though the total kilograms of marijuana sold in the second quarter surged 270% to 5,588kg, up from 1,514kg a year ago.

Investments into cultivation centers in Portugal and Canada have cut into the company’s gross margin. Tilray CEO Brendan Kennedy went on CNBC’s “Closing Bell” to share his positive outlook.

“The way we look at it is its early days, and we’re continuing to invest to build long-term value for our shareholders.” 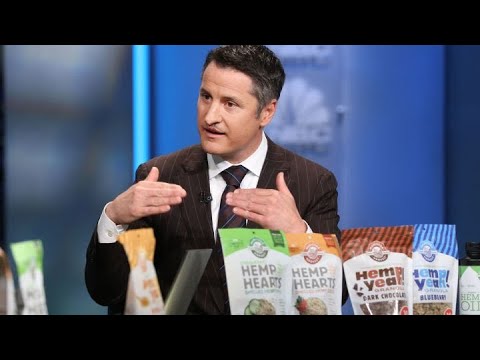 Tilray will release its first line of CBD products with Authentic Brands in the second half of the year in the U.S. They’re also gearing up to introduce cannabis drinks in Canada when regulations allow. The pot company surged late last year when they partnered with the world’s largest brewer, Anheuser-Busch InBev, to study cannabis-based beverages.

Mike Tyson is doing his part to boost the sliding cannabis market, though you couldn’t tell from the recent performance of pot stocks. During a recent episode of his podcast “Hotboxin with Mike Tyson,” the former boxing champ revealed his astonishing cannabis intake. Tyson claimed to smoke up to $40,000 of marijuana each month.

Since his last fight in 2005, Tyson has jumped headfirst into the cannabis industry. He started developing cannabis resort, Tyson Ranch, earlier this year in Desert Hot Springs, Calif. During the podcast, Tyson said the desert “oasis” of 420 acres will include a golf range, a wellness center, a wave pool, a convention center, festival grounds, and a one-acre lazy river.

He also launched his inaugural “Kind Festival” in February of this year. The cannabis-themed music festival drew a crowd of 7,500. “We’re planning for 50,000” for next year’s festival, Tyson said. With Tyson’s marijuana appetite and potential shifts in the U.S. presidency, the cannabis industry could be on the verge of a breakout.