EA's half-hearted FIFA 20 port reveals all you need to know about its relationship with the Nintendo Switch. | Source: AP Photo / Martin Meissner

The Nintendo Switch faces a stiff challenge when the PlayStation 5 and Xbox Series X launch later this year, but the console has already been a wild success. So much so that EA recently remarked at how “very pleased” they were to see the console selling so well.

Not if you read between the lines.

EA Never Believed in the Switch

EA might be gushing about the Nintendo Switch now, but their actions prove that they never believed in the console.

The definitive proof? Besides FIFA, they’ve only released two original titles for the console.

And their support for FIFA has been half-hearted at best. FIFA 20, for example, is glaringly inferior on the Switch compared to the PlayStation 4 and Xbox One.

But according to Nintendo Insider, EA plans to announce new Switch releases in the coming months. Apparently the console is now big enough for EA to justify bothering to port their games to the system.

Why the sudden change of attitude?

As with everything that motivates EA, it’s because they’ve seen dollar signs where they didn’t see them before.

EA Only Jumps on the Bandwagon Once It Proves Profitable 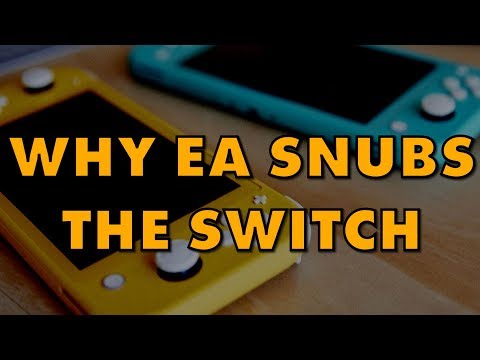 In the past, EA has claimed they didn’t prioritize Switch development because Nintendo’s first-party titles were too popular [Nintendo Insider].

But we’re also conscious of the fact that the top-selling titles by a long shot or all the Nintendo software, which is fabulous software, but it helps us balance sort of the realities of how big our markets can be there. But trust that we’re looking at that.

Forgive me for not giving any credence to such a lame excuse. I suspect that it’s really because EA thought it’d have a more challenging time exploiting Nintendo customers by flooding their games with loot boxes.

At least until now.

Get ready for EA to lean hard into pretending they liked Nintendo all along. Then make another rapid pivot again after they’re reined in for sneaking microtransactions into games aimed at children and calling them “surprise mechanics.”