The Stauffer Scandal Exposes Everything Wrong with Influencer Culture

The Stauffers, YouTubers who became famous after adopting a boy from China, have “rehomed” the child. But there’s a bigger problem here.

If this is the first time you’ve heard of the Stauffers, you’re not alone.

The Ohio couple — whose names are Myka and James — have been sharing “their parenting journey” on their YouTube channel since 2014. They’ve only become famous in the past two years, after they began chronicling their adoption journey.

But now they’ve made headlines for all the wrong reasons — and in so doing, they’ve inadvertently exposed the toxicity of influencer culture as a whole.

The Stauffers ‘Rehomed’ Their Adopted Child

In 2017, the Stauffers began the adoption. Myka Stauffer said that she and her husband were adopting a “special needs child” — whom they would name Huxley — from China. And, in typical influencer fashion, she monetized the entire process.

After producing more than 27 monetized videos chronicling the adoption, plugging a fundraiser for “Huxley’s special needs,” and charging $5 a person to “unlock a puzzle piece” featuring Huxley’s face, the Stauffers decided to “rehome” Huxley.

While the Stauffers’ tears moved a select few “fans,” the vast majority called them out for their reckless behavior.

It seems rather gross — to put it mildly — that the Stauffers had no problem profiting off of their special needs child, but seemed reluctant to actually take the steps to be proactive and engaged parents.

Not everyone wants children. That’s okay. There are a number of reasons why people choose not to have children, and all those reasons are valid and should be honored. 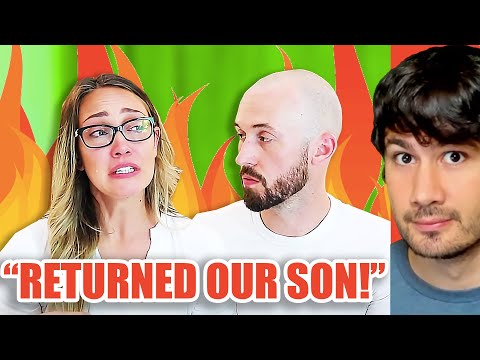 But that seems to be indicative of the seedy underbelly of influencer culture: appearances are more important than reality.

It’s more important for Instagram models to appear rich than to be rich, which is why so many of them live in studio apartments while flexing about Gucci bags.

It’s more important for Instagram influencers to appear influential than to be influential, which is why so many of them buy followers and inflate engagement.

And it’s more important for the Stauffers to appear like good parents than to be good parents, which is why they had no problem giving their child away like he was an object collecting dust in the basement instead of a living, breathing human being.

Influencer culture is toxic. And it’s time to make it come to an end.

September 22, 2020 23 Comments
← PreviousManchild Scott Disick & Sofia Richie Split – And I’m Glad It’s Finally Over
Next →Ellen DeGeneres Should Absolutely Be Sacked – Here’s Who Should Replace Her