It has been an incredibly stormy few weeks in Elon Musk’s Shortville for Tesla (NASDAQ: TSLA) bears. Musk’s EV manufacturer is now on the brink of hitting the historic $500 level, having more than doubled in value since October in 2019. Despite this, massive amounts of short trades, betting against TSLA stock, continue to be made.

Bears Double Down Despite Tesla’s Surge

While it is not unusual for Wall Street traders to double down on short-bets, the battering they are taking is extraordinary and helping to fuel Tesla’s steep rise. In fact, data demonstrates that the percentage of traders banking on TSLA’s fall is rising in step with the share price.

Although there are a lot of speculators losing money, it’s actually not hard to see why there is so much activity on the short side.

Wherever you look, technical indicators are suggesting that TSLA is overbought. The RSI, Bollinger bands, stochastics; you name it, and it’s shouting sell and maybe even showing some bearish divergence for good measure.

Of course, if the last ten years have taught us anything, it’s that technical indicators have often bowed to the relentless liquidity life-support from the Federal Reserve. Still, it’s hard not to look at Tesla’s stock chart and not think there is some major profit-taking on the way.

Stepping away from the graveyard of bears and into the lush, green fields of Elon Musk’s true believer bulls, things have never been better. China is in love with the brand, Jim Cramer is talking about endless growth on “Mad Money” and vehicle deliveries were up 50% from 2018. Obviously, there are still all of the old world worries about debt and earnings, but these are fading as the Shanghai Giga factory lives up to its billing. 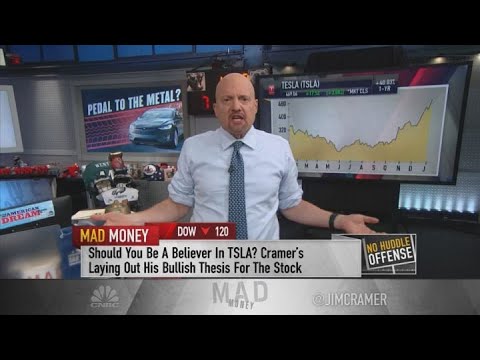 When you boil it down, all of these facts clearly demonstrate why TSLA volumes are booming. There is something here for everyone, whether you are an old-school bear from the 80s looking at EBITDA and expecting the entire house of cards to collapse overnight, or an EV fan-boy ordering his 5th Cybertruck and betting on Elon getting his $100 billion pay-day. You can almost smell the whip-saw brewing.