After a huge run, Elon Musk’s Tesla (NASDAQ: TSLA) is now worth more than $100 billion. A 7% rally on Wednesday pushed the stock price to a new all-time high of $594.50, which means the billionaire is set to earn the first tranche of his monster pay package.

Here’s why the Tesla CEO could still be miles away from securing his first massive payday.

The first headwind that Elon Musk has to deal with is the actual wording of his pay agreement with Tesla stockholders. Contrary to how the media has painted his deal, it is not as simple as TSLA’s market-cap breaching $100 billion and Musk getting his stock options in the mail.

In reality, there are trailing averages of six months and 30 days that must be achieved.

This means that Tesla must not only maintain its $100 billion valuation in the short-term but will likely also have to move considerably higher than this target to ensure Musk gets his 1% of the 18.2 million outstanding shares. Those shares are currently worth approximately $1 billion.

Tesla could have a challenging time maintaining a $100 billion market cap. It’s unlikely that the stock’s parabolic spike will transition quietly into a sideways trend.

A correction is highly possible, and overenthusiastic bulls could be cleared out in the same way the pessimistic bears were at the start of the company’s awe-inspiring run last year.

There is still plenty of enthusiasm on Wall Street, and analysts seem to come out with more and more outlandish Tesla forecasts by the day. 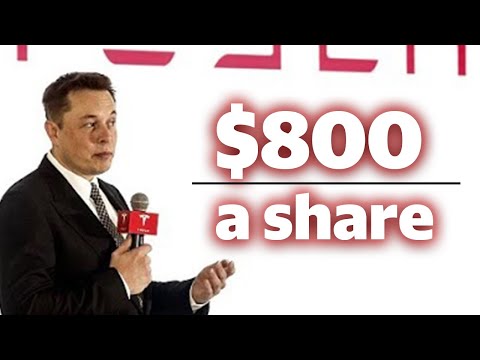 But some investors are starting to get wary. Morgan Stanley recently moved their position in Tesla to underweight, and they’re not the only asset manager worried about the stock.

Scott Hofman, managing partner at Ratio Capital, told CCN.com that the stock is characterized by “dangerous euphoria.” He warned:

Tesla is self-driving up a steep hill on the charts and it is uncertain how severe the damage will be when it crashes. Last year’s doom and gloom has been replaced by dangerous euphoria that seems to ignore all common sense valuations, which are now double what many sensible investors saw as overvalued a year ago.

There is no question that competition is massing, with upstart and major car companies alike enjoying considerable investment in electric vehicles.

Fundamental and technical risks aside, there’s a scenario in which Tesla stock spirals even higher, and Elon Musk still doesn’t get his payday.

The mercurial billionaire must navigate an outstanding lawsuit brought by shareholders who allege his lucrative pay packages violated the company’s fiduciary duty.

Given that Musk stands to earn an additional 12% of shares on top of his existing 22% stake in the EV manufacturer, there’s no denying that the scale of the package is substantial. If he runs the table, he could become the wealthiest person in the world.

Musk does have one big argument in his favor: His interests are clearly aligned with other shareholders, and they stand to profit alongside him.

All Aboard the Tesla Moon-Trip

Risks or no risks, Tesla is the most valuable publicly traded car company in U.S. history – and the first to hit $100 billion.

Elon Musk is primed to receive a monster payday, but there will be a few sleepless nights as the trailing averages swing.

The SpaceX CEO will know better than most that the faster and higher you go, the more difficult forward progress becomes.