It has not been a good few weeks for Elon Musk and Tesla. Whether it is concerns over safety, the firm’s expansion into China, or even the role of Musk himself as CEO, the luxury electric car manufacturer has been dominating the headlines for all the wrong reasons. Strangely, Musk has a new ally in the fight for positive media coverage, and it isn’t who you’d expect.

Andrew Left, arguably one of the most notorious short sellers in the business, revealed in the Citron Research newsletter that he has now turned bullish on Tesla. Left is gunning for TSLA shares to break to $320. Those who follow the newsletter will know that Citron had been extremely bearish for a long time on Tesla’s prospects before suddenly changing that outlook in response to the firm’s recent share price woes.

Notably, Citron is bullish on Tesla even though they don’t believe Elon Musk will still be leading the company a decade from now. Additionally, they are still apparently seeking legal action against the carmaker:

“We doubt Elon Musk will be the CEO for the next ten years. Citron is also not a fan of his disrespect for the SEC, and we have no doubt that he is guilty of a few REG FD violations. And yes we are still suing for the $420 tweet.”

For those who missed it, here is the tweet in question which got Musk booted as Tesla chairman.

The rest of the report is out-and-out bullish on both Musk and the company. 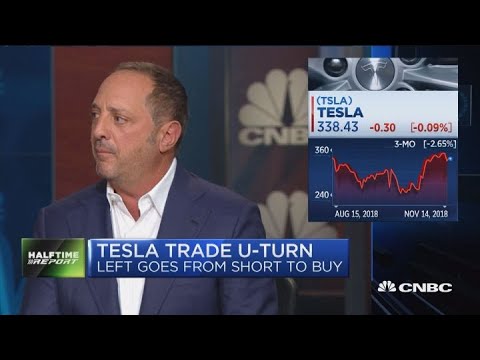 As Citron notes, Elon Musk is running several highly successful companies with a unique sense of style. This same sense of style seems embodied in his products which are generally gorgeous (model X aside). It is the scatter-gun style of governance which both entrances and bemuses investors.

On the one hand, he is struggling even to deliver Model 3s, but then he is on the news wires announcing pickups, self-driving trucks, a model Y, and new roadster.

So is Citron Research correct? Well, there are a couple of potential roadblocks to the fulfillment of their bullish price target.

The most pressing factor is that broader market conditions are hinting at a slowing in speculative appetite. Global growth conditions can hit luxury automobile imports hard, especially since Tesla has a considerable debt burden.

The next problem that they don’t address is that some people believe Musk is as integral to Tesla as Warren Buffett is to Berkshire Hathaway. Investors might not react well to the idea of losing the greatest showman in the corporate world. What TSLA does have is an incredibly “sticky brand” and a cult-like following. They have rallied around the CEO and are extremely unlikely to lose any of their enthusiasm for the carmaker.

At present, Tesla’s market direction is anything but certain. Just look at the stock’s weekly chart.

As you can see, Tesla is basically in a range-trade with decent volume. If one knew nothing about this stock at all and just looked at the chart, they would guess that there was some investor optimism allied with a healthy dose of skepticism. This battleground of bulls/bears is what Citron Research leverages to try and get a high-profile marketing win if they turn out to be correct in their prediction.

Now, look at the last two months on the chart. First, observe a considerable volume spike as the rally was eaten by short sellers, and then this month a bigger spike as the dip is eaten into by bulls.

Uncertainty is the by-product of Musk’s leadership approach; you don’t know what the outcome of his projects is going to be or if they’re even feasible. Maybe he doesn’t either.

For every Andrew Left who likes that Elon is managing multiple companies and smoking on a radio show, there will be an investor who hates it. The result? Massive media coverage and an extremely choppy share price.