Most of the controversy stemming from Tesla accidents has revolved around the electric carmaker’s “autopilot” feature. But now Elon Musk’s company is in the spotlight following a fatal accident the family blames on something far more basic – door handles.

According to a local CBS affiliate, the family of a man who died after his Tesla Model S crashed and caught fire allege that the car’s futuristic door handles malfunctioned at a critical moment. Unlike regular cars, the door handles on the Model S auto-retract and remain hidden unless a key fob is nearby. 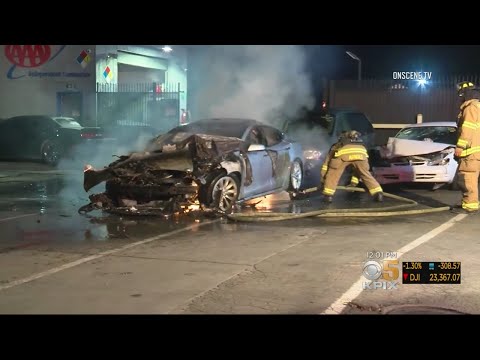 Consequently, a police officer and bystanders who rushed to help could not open the Tesla vehicle’s door to save him. The driver, an anesthesiologist named Dr. Omar Awan, was burned beyond recognition in February this year.

The victim’s family has now filed a wrongful death lawsuit. They are seeking more than $15,000 in damages in a move that adds to Tesla’s pile of legal troubles:

This is not the first time Tesla’s “space-age” door handles have been blamed for a Model S fatality. A wrongful death lawsuit filed by the family of the late Kevin McCarthy attributes his inability to escape the vehicle following a crash to a number of factors, including faulty door handles.

“Mr. McCarthy was observed alive postimpact attempting to escape the vehicle,” the litigation team said. “However, due to defects in the vehicle, he was unable to do so, causing him to literally burn alive and to inhale toxic gases.”

According to Tesla’s emergency response guide, this shouldn’t be a problem:

“When an airbag inflates, Model S is designed to unlock all doors, the trunk, and extends all door handles.”

However, the plaintiffs in these wrongful death suits claim that the technology failed at the most critical point. And unlike other defects, this one is unlikely to be noticed in ordinary circumstances – only when it is too late.

I designed a new @tesla door handle (for when it breaks) once you get the right rope material it’s very attractive/functional pic.twitter.com/ZBurHj264l

As a failsafe, the emergency guide advises the following:

“If the door handles do not function, open the door manually by reaching inside the window and using the interior door handle.”

The problem with this, especially in the heat of an emergency, is that civilians who arrive at the scene before first responders may not have the tools to break open the windows. And being untrained, they may not know what to do even when the tools can be improvised.

Notably, Consumer Reports listed “broken power door handle” as one of the most common problems with the Tesla Model S as early as 2015.