Fans of hip hop know that Da Brat is one of the few out and proud bisexuals in “the game.” Considering that the rap music industry has a big problem with homophobia, and it’s not exactly kind to women, this is quite the feat.

Most people also know that today, the woman born Shawntae Harris is in a relationship with social media influencer Jesseca Dupart, AKA Big Booty Judy.

But for some reason, it came as a surprise that one of Da Brat’s previous high-profile relationships was with basketball legend Allen Iverson.

Back in the 1990s, Da Brat and Allen Iverson were at the height of their respective careers. They met thanks to their careers, and they fell for each other pretty quickly.

Iverson even took Harris on several trips with him, including one particularly notable trip to Japan.

Naturally, it didn’t take long for the two of them to fall in love. Unfortunately, Iverson was a bit of a player — or, as Harris put it, “a h*e.”

I was like, ‘This is it!’ But then I think you know, basketball players? H**s. He had a baby mama, some kids. He had a lot of stuff going on. The last straw, I think we were sitting outside the hotel, in the hallway. And this half naked b*tch, walks up the hallway talking about she looking for him. I’m sitting there with him. I’m like, ‘B*tch, I know you see me sitting here with this [n-word]. You still gon say you looking for him?’ I must have molly whopped that b*tch down the hallway.

Here’s the problem: while she was fighting with other women about “her boyfriend,” Iverson was dealing with his on-again, off-again baby-mama, Tawana, whom he married in 2001. Tawanna Iverson, who was Allen Iverson’s high-school sweetheart, shared five children with the basketball player, and it seemed she tolerated his cheating ways before filing for divorce — twice — and ultimately completing for good in 2013.

And here’s the ultimate kicker: Tawanna Iverson reconciled with Allen Iverson back in 2016. Though it’s unclear if they got remarried, they’re still very much together. Sheesh!

Da Brat addressed her relationship with Iverson on Kandi Burruss’s show, “Speak on It,” which you can see in the video below. 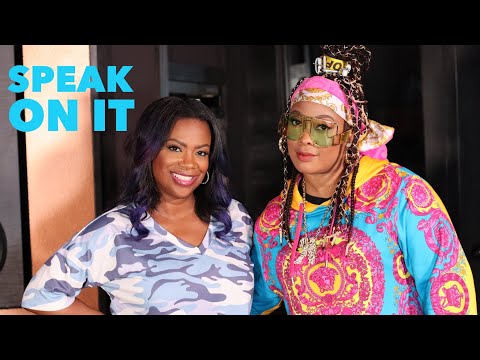 Bisexual Means Exactly What It Says It Means

Not that this should have to be said, but being “bisexual” means “attracted to both sexes.” Additionally, those who were alive and sober in the 1990s will gladly tell you that their dating status wasn’t exactly a secret.

I’m not sure why Da Brat became a trending topic because of this revelation about Allen Iverson, but I’m happy to clear up any confusion people may have had about the matter.