It’s always nice to hear about a game with an exciting new concept. Supermash is one such game.

The upcoming Nintendo Switch title takes the idea of genre-mashing to the extreme. In Supermash, players will choose two genres from a list of classic gaming tropes, and a randomly generated game will be created for them to play through. 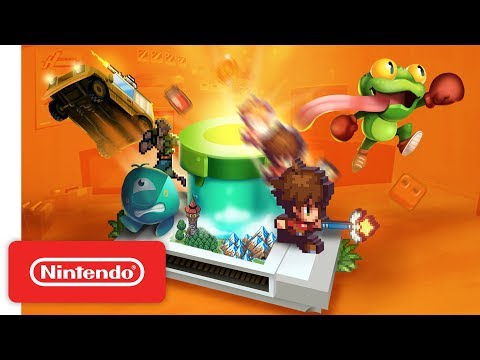 This concept sounds completely wild. Being able to mash two genres together seems like a lot of fun. You can even share your creations with your friends, too, meaning that great combos have the potential to become insanely popular.

How Much Replay Value Will Supermash Really Offer?

The concept of a game that creates games is super interesting. Just look at Dreams. Being able to create your own games has been a holy grail for gamers everywhere for years. That’s basically why we have an indie scene at all. The issue with Supermash is that it’s not immediately clear how much input the player actually has.

From what we see in the trailer, it looks like your just pick a genre pair and then play the resulting game. Even if the number of genres to choose from is pretty large, there’s still a limited amount of possible combinations. On top of that, if all you do is select from two genres and end up with an auto-generated game, how deep can those games really be?

Sure, you might get a technically different game when you mash up JRPG with an FPS instead of a platformer. But if the difference only ends up being a different main character or visual style, then what’s the point?

We Have Little Information to Go On

This doesn’t mean that Supermash is going to be bad.

Even if the generated games don’t feel that different, a lot of fun could still be had with it. I’m just pretty skeptical that it’s going to be that groundbreaking or impressive. Part of that is just not knowing anything about how narrative is going to play into the game.

Have you ever wanted to play a Platformer with Stealth elements or a Shoot ‘Em Up with JRPG battles?

Well you can in #SuperMash from @digitalcontinue, a game where you mash together genres to create unique gaming experiences! Coming to #NintendoSwitch May 2020. #IndieWorld pic.twitter.com/XHMqrTS4T1

Hopefully, as more information comes out about the game, we’ll find out just how the auto-generation works. If we’re lucky, it’ll be possible to add your own plot or narrative to give the games more flavor, or at least those elements will be auto-generated by the game alongside graphics and mechanics.

No matter what happens, Supermash is going to be interesting – at the very least. In the best-case scenario, we might even end up with a game that can genuinely generate deep and involving experiences on the fly. Call me cynical, but I just don’t see that happening right now.